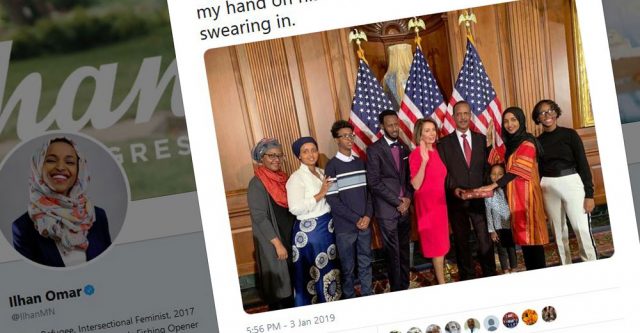 Rashida Tlaib and Ilhan Omar took their ceremonial swearing-in oath on copies of the Muslim Holy book, the Koran (some spell it Quran), Thursday, January 3, 2019. Omar wore a traditional hijab at her ceremony, and Tlaib wore a traditional Palestinian thobe or dress. Before their swearing in, head covering of any kind had been banned in Congress.

Omar used her grandfather’s Koran for her swearing-in:

As a kid, I acted as my grandfather’s translator at our caucuses and he was the one who first sparked my interest in politics.

I wish he could be here to witness this historic moment, but he was here in spirit as I placed my hand on his Quran for the ceremonial swearing in. pic.twitter.com/PRNNOPQXuU

Public Radio International (PRI) and other media outlets reported that Tlaib used the 1734 English translation of the Koran that belonged to Thomas Jefferson, but Daily Sabah reported that she used her personal copy [1].

This really happened. I am U.S. Congresswoman. Not bad for a girl from southwest Detroit who didn’t speak English, daughter of Palestinian immigrants.
#13thDistrictStrong: You helped change Congress forever. Now, let’s get to work to change our neighborhoods. #rootedincommunity pic.twitter.com/Xz511eIcyg

There Is No Requirement To Swear On A Holy Book

Back in the days of America’s Founders, people took oaths seriously. Number one, Common Law dictated that breaking an oath was illegal, e.g., Perjury. Number two, most of our founders were devout Christians and took Jesus at his word when he said, “Let your yes be yes, and your no be no…” The oath was simply you’re saying, “Yes, I will do what I’m saying I will do right now.” In the case of Federal positions, the Constitution lists which offices must swear or affirm before administering the office for which they were elected.

Some Presidents have not used Bibles including Theodore Roosevelt, John Quincy Adams, and Franklin Pierce [2]. Even the phrase, “So help me God” is not mandated by the Constitution. It is a personal choice.

It’s interesting to note that the word “affirm” is included in the Constitution for just the circumstances listed above. Many Christians even today do not swear an oath but will give their word or “affirm” that they will perform what they say.

The ban on hats or headwear in the House was adopted in 1837 and applied while Congress was in Session [3]. After 181 years, in 2018 a partial repeal to allow religious accommodation for some faiths that practice head covering was proposed with the election of Ilhan Omar, who wears a hijab [4].

Both Support Measures To Punish Israel

Both Rashida Tlaib and Ilhan Omar endorse the Boycott, Divestment and Sanctions (BDS) movement. The BDS movement seeks to punish the nation-state of Israel by economically depriving the country for its alleged mistreatment of Palestinians living in the Gaza Strip and West Bank [5].

Omar and Tlaib are joining Rep. André Carson of Indiana, a Democrat, for a total of three Muslim members of the House [6].