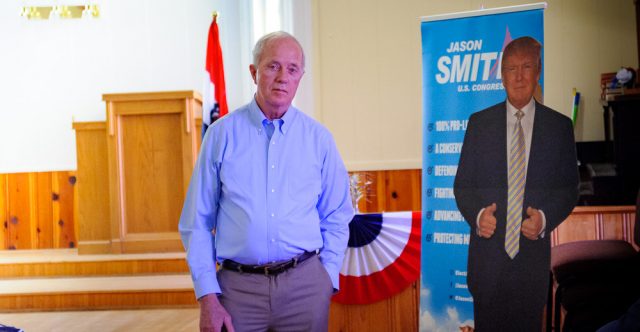 Alton, Mo. – Alton Missouri’s Lincoln Day began at 1 p.m. at the Community Worship Center in Alton with Laird leading the meeting. Some of Oregon County’s current representatives and senators attended and spoke at the meeting today. A few people announced that they were hoping to run for office in the coming Missouri elections.

Mike Cunningham, the state senator for District 33, was the first speaker- who enjoys southern Missouri’s spring. He is serving his seventh year, but he will be reaching the term limits next year. He gave a talk about what the Republicans were doing. He said the governor was doing a good job so far by getting people working at prisons, and by developing the economy, which is creating more jobs. When questioned about the opioid crisis Cunningham said it was a balancing act.

U.S. Representative Jason Smith briefly shared his joys for being Missouri’s representative for District 8, the largest district in the state. In working in the U.S. House has shown him that the Democrats of today have a different agenda than even the past Democrats of the Bill Clinton administration. Smith has worked with Alexandria Ocasio-Cortez and is repulsed by her $93 trillion “Green bill.” Jason Smith announced that he would be running again for U.S. representative in the 2020 election.

Running in the Next Election

Van Kelley is running for state senator. He believes in life, liberty, and the pursuit of happiness. He is fighting for lower taxes, smaller government, and life at conception.

Jack Lattes is running for state representative. He is pro-life, for the second amendment, and the economical growth of Missouri.

Parrott, the local treasurer, wanted to thank the Republican party for voting her into office as well as encourage those who attended to continue to get out and vote.

Justin Kellee, the prosecuting attorney, gave us a brief update. Their office is now open through lunch instead of closing early.