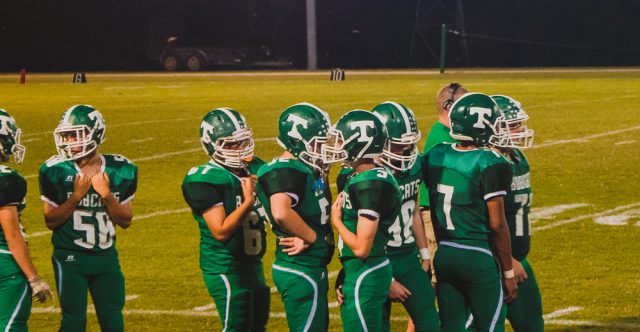 Thayer, Mo. – On October 5, 2018, Thayer Bobcats football played the Ava Bears. This was a conference game. At halftime, the score was 0-20, and by the end of the game, the Ava Bears easily won.

The team came out excited and ready for the matchup. Right from the start, however, Ava wanted to show their strength. Their team players also ran on the field and demonstrated their desire not to fall behind.

The evening did not go well with the home team, Thayer Bobcats. By halftime, the score was 0-20 with the Bobcats sinking slowly. The marching band performed to rouse up the team as well as the stands at halftime. The second half was full of promise as the Bobcats got close to the end zone. But in the end, they just could not convert points. And by the end of the fourth quarter, the Bobcats had sunk to 0-33. The players respectfully shook hands knowing that they had done their best and walked themselves off the field.

Thayer Bobcats record is now 4-3. Willow Springs is the next opponent for the Bobcats with an away game Friday night Oct. 12, 2018. Maybe they can rack in a few more points then they did this game.