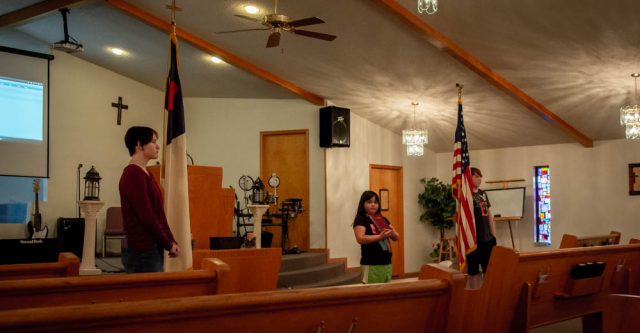 The pledges are being said at the National Day of Prayer observance on May 6, 2021, in Alton, Mo.

Alton, Mo. – Matthew 18:20 says “For where two or three are gathered together in my name, there am I in the midst of them.” The National Day of Prayer was Thursday, May 6, 2021. Alton held their observance at the Alton Assembly of God Church at 7:00 pm. Many people came to pray for the country.

Around three dozen people came to pray for the government, church, and the nation.

After the pledges and song, Rev. Charles Trantham gave a short speech. Mr. Trantham said during his speech,

All we want to do is pray… we don’t turn from our wicked ways, God won’t hear.

Nearing the middle of his speech, he also said,

He also read the national proclamation from the President designating this as a day of prayer, although not once mentioning God. After Charles Trantham was done, Brother Wayne Adrian, the pastor of Smyrna and Norman churches, said the prayer and a little talk. During his talk, he said the following:

What was wrong in the Bible days is still wrong today.

While May 6 is the National Day of Prayer, that does not mean we can only pray on that day- we can pray every day.