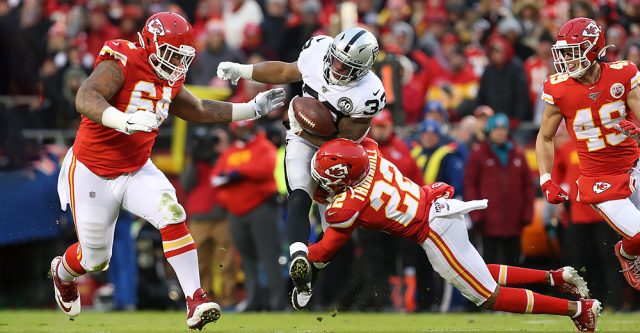 Kansas City, Mo. – After the Chiefs entered their bye week with a win, they came back as good as ever and won 40-9 over the Oakland Raiders once again. This game has a great impact on who will lead the AFC West; this was also the first game that the whole team was healthy on the Kansas City Chiefs. The Chiefs had already played against the Raiders in week two- with the Chiefs winning 28-10.

During this game, there were no penalties on the Chiefs, but there was a lot from the Raiders.

The Chiefs Take the Lead

To start the game, Chiefs safety, Tyrann Mathieu, intercepted the ball intended for a Raiders receiver. The Chiefs then drove downfield, making a touchdown from Darrel Williams and also getting points from the field goal attempt.

When the Chiefs kicked off to the Raiders, they fumbled the ball, allowing the Chiefs to recover it.

In the second quarter, the Chiefs made another touchdown- made by their quarterback Patrick Mahomes who ran it into the endzone. When the Raiders got the ball back Chiefs rookie defensive player, Juan Thornhill, intercepted the ball and got another touchdown for the Chiefs putting the score to 21-0.

When the Raiders couldn’t bring the ball in for a touchdown, they attempted a field goal to put some points on the scoreboard, which they missed by a wide margin. The score at halftime was 21-0 with the Chiefs in the lead.

In the third quarter, Kansas City had another touchdown, but both teams had penalties on the play, so the third down was repeated. Although the Chiefs didn’t get the touchdown, they did get a 3-point field goal by Harrison Butker, the Chiefs kicker. Butker made the 50-yard field goal into the wind showing why he’s one of the best kickers in the NFL.

Later in the quarter Mahomes almost threw his third interception of the year. But the call was changed to pass interference by the Raiders so that there was no interception. Kansas City then managed to get another touchdown before the third quarter ended from LeSean McCoy and got a 1-point field goal.

Through all the first three quarters, the Chiefs defense had managed to shut down the Raiders, but Oakland tried to make a comeback starting with a 3-point field goal in the last quarter. Kansas City matched that with another touchdown from Darwin Thompson, and they also got the field goal. That put the score to 38-3 with the Chiefs in the lead.  The Raiders then made their first touchdown and tried to get the field goal, but the Chiefs blocked and caught it. Kansas City ran the length of the field to get two points.

Patrick Mahomes, the Chiefs quarterback, appeared healthier then he has been all season. He completed 15 of 29 throws, threw for 175 yards, threw one touchdown, and had three carries for 25 yards. He also had one rushing touchdown, the first for this season.

The Chiefs will go against the New England Patriots on December 8. The game will be held at Gillette Stadium at 3:25 PM Central Time.