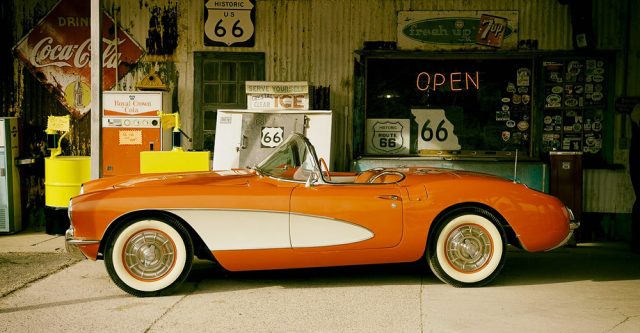 On June 28, 1953, Flint, Michigan rolled out the first Corvette. Those in the know will recognize this to be publicized as a two-seater sports car. In 1953 only 30 Corvettes were made.

History Of This Vehicle

General Motors’ designer developed this sports car to compete with Europe’s MG’s, Jaguars, and Ferraris. At the Motorama auto show in New York City, the Corvette was featured by GM. It had a fiberglass body and a six-cylinder engine. The debut was a success and production began right away.

The first ‘Vette was hand assembled. It held a Polo White exterior and red interior. Pluses included a two-speed Powerglide automatic transmission, wraparound windshield, and detachable plastic curtains instead of side windows. The first Corvettes had inside door handles and no outside ones. Some amenities at the time were a clock, cigarette lighter, and warning light for an engaged parking brake. The speed was 0-60 in 11 or 12 seconds. All this for the low price of $3,490. Quite a contrast to today’s starting price of $67,400 [1].

By 1954, Corvette production was moved to St. Louis, Missouri. By 1955 the Corvette was energized with a V-8 engine. It continued to improve and earned the nickname “America’s Sports Car.” Since then, it has appeared in numerous movies and television shows [2].