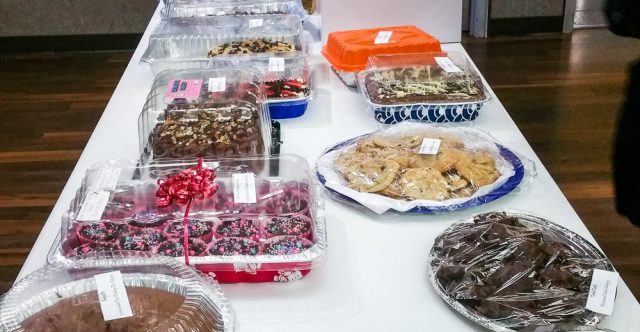 On Saturday, February 9, 2019, Christos House held its annual Chocolate Festival and Fund Raiser.  Each past year participants, as well as newcomers, anticipate this event. This year was no exception. Chocolate lovers had a plethora of choices from drinks to candies, to cakes and cookies.

Judges stood behind closed doors between 10:00 and noon that Saturday to make their decisions. That insured an unbiased call. , but it was a comfortable, casual setting. Professionals competed against each other while individuals were divided into age groups and diverse categories for fair judging. Winners received medals.

At noon the doors of the First United Methodist Church in West Plains, MO opened to the public. The church has not always hosted this event, but it was a comfortable, casual setting. They were well-prepared for the situation. Long rows of tables were arrayed with a culinary delight of chocolates of various categories and cooking expertise. For a mere fifty cents a tasting ticket, everyone could taste something. The difficulty came when deciding which chocolates to choose.

Josh Redfield from Christos House headed up the event and made sure each attendant felt welcome. He had several volunteers throughout the affair. All proceeds went to help victims of domestic and sexual violence. They hoped for sufficient funds to be received to lay the groundwork for a second shelter location. Terry Danahy was the fast speaking auctioneer.

After much of the tasting was done, the sale began at 1: 30. Each contestant had been asked to bring duplicates of his entry, the second being auctioned off. From the youngest cooks to the fancy professionals, all chocolate was auctioned. This included three unique gift baskets assembled by local merchants. Prices were adapted for any budget.

At the end of the day when the chocolate was all eaten, prizes awarded, and plates auctioned off, everyone left happy.