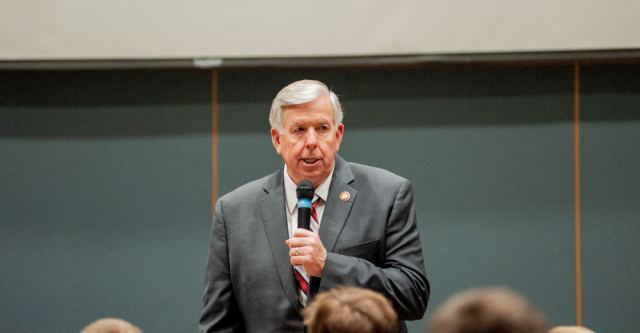 Governor Parson speaks to TeenPacters on March 30, 2022, at Jefferson City.

Tuesday, May 17, 2022, Governor Parson signed into law measures to ensure the validity and protection of each legal citizen’s vote. This much contested bill was passed in both the Senate and the House just shortly before this year’s session ended. He signed into law SB-631. Here is what the new law states.

Governor Parson is against expanding mail in voting. He said,

This only enables voter fraud and ballot harvesting [1].

While Missouri does allow for mail in voting, a registered voter must specifically request a mail in ballot. This voter must submit the ballot with a notarized statement under penalty of perjury with their ballot. In addition to this, the mail in ballot needs to be received from the USPS at the proper location by 7:00 p.m. on election day. One may also vote in person without any excuse two weeks preceding an election.

This requires any photo to have a photo identification to cast a ballot. In order to operate in most areas of society, one already has a photo id; this correlates with that. Although Democrats claimed that the photo id would negatively impact minorities, the bill did pass with a choice of allowances for those without a propriate id.

Electronic voting machines will be banned after 2024, except where a voter with a disability cannot use a paper ballot. These same machines will be required to have a paper trail for a potential election review. Secretary of State Jay Ashcroft is allowed to review the list of voters in any jurisdiction.

Senator Bob Onder commented on the bill’s passage by saying,

It is all in the interest to have an election that is as free and fair as possible [2].

How The House And Senate Voted