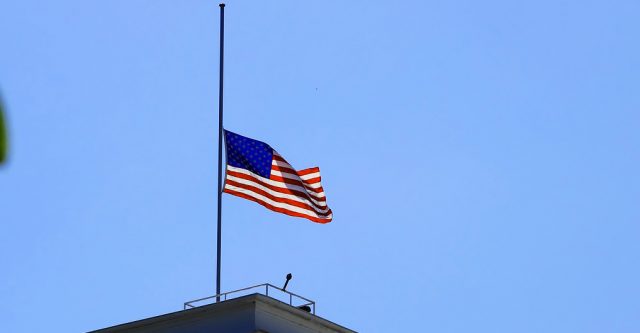 Flag at half mast.

Federal Businesses Will be Closed

On Wednesday, December 5th, post offices will be closed. The New York Stock Exchange will also be closed for the day. Federal employees are expected to get the day off as the government will be closed on Wednesday.

The United States Postal Service said that although their offices will be closed on Wednesday, they do plan on having limited delivery service to ensure that their work remains fluid.

Out of respect for the 41st President of the United States and to honor his vast contributions to our country during his lifetime, and consistent with the Presidential Proclamation, the United States Postal Service will suspend regular mail deliveries, retail services and administrative office activity on Dec.  5.  [1]

As Well as the NYSE

The New York Stock Exchange announced that they would be closed as well in honor of former President George H.W. Bush. The NYSE Group President, Stacey Cunningham, released a statement on President Bush on Saturday.

“We remember President Bush admiringly as a veteran who fought totalitarianism, a statesman who advocated for freedom, a leader who served his country, and an unabashedly dedicated family man,” Stacey Cunningham, NYSE Group President said in a statement. [2]

“He will be remembered for his decades of service to the nation and the world, and it is appropriate that the New York Stock Exchange closes on Wednesday, the National Day of Mourning, to honor President Bush’s enduring legacy.”

And the Supreme Court

The Supreme Court issued a statement as well, saying that Chief Justice John Roberts has ordered the building closed on Wednesday for the day of mourning. [3]