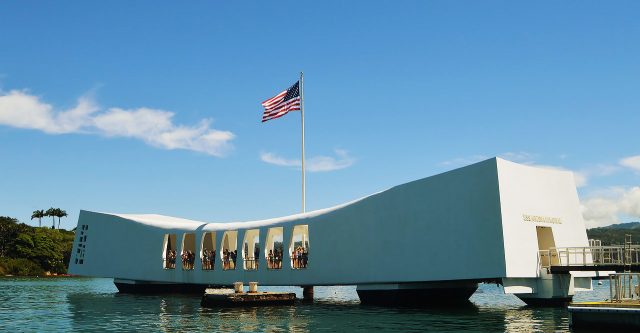 Seventy-seven years ago, on December 7th, 1941, over 2,400 Americans were killed at Pearl Harbor. The day after the attack, former President Roosevelt made his famous “Infamy speech” where he addressed the nation concerning the Pearl Harbor attack. On December eigthAmerica declared war on the Empire of Japan, which is now known as World War II.

A Day Which Will Live in Infamy

Franklin D. Roosevelt, President at that time, gave a speech addressing the United States. This speech is now remembered as Roosevelt’s “Infamy Speech” as he began with the phrase:

a date which will live in infamy — the United States of America was suddenly and deliberately attacked by naval and air forces of the Empire of Japan. [2]

And December 7th has lived in infamy. For the past seventy-seven years there has been a multitude of memorials and events that mark the attack. Today only five people remain alive from the sinking of the USS Arizona, and there are less than 500,000 veterans of World War II who are still alive. [3]

Gone but not Forgotten

Pearl Harbor may be a thing of the past along with World War II, but we shouldn’t forget it. We should honor those who served and died in World War II. We should also take care not to let it happen again.

Today, we honor those who perished 77 years ago at Pearl Harbor, and we salute every veteran who served in World War II over the 4 years that followed that horrific attack. God Bless America! https://t.co/zbu4NLVr4G pic.twitter.com/5hbLDrqg40