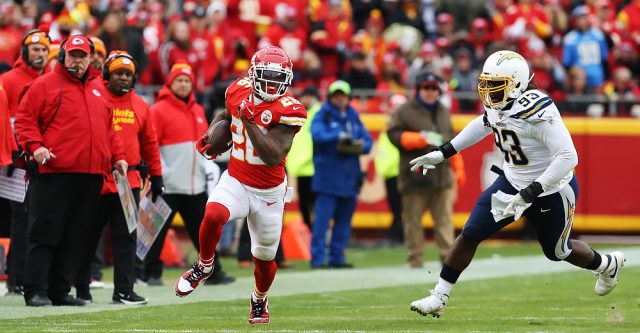 Kansas City, Mo. – The Kansas City Chiefs had their final regular-season game against the Los Angeles Chargers. The game was held at Arrowhead Stadium in Kansas City, Missouri; the Chiefs won by ten points with an end score of 31-21. The Chiefs also clinched number two seed in the division, has a first-round bye, and has the home-field advantage since the New England Patriots lost to the Miami Dolphins just minutes before the Chiefs won their game.

To start the game off, the Chargers did nothing for their first drive of the game. When Kansas City got the ball, it was almost intercepted immediately. The first almost-interception for Patrick Mahomes, Chiefs quarterback, was given back to the Chiefs because the Chargers got a penalty. For the second almost-interception, the Chargers did get a touchdown, but since they had another penalty, both penalties were offset, and the Chiefs once again got the ball back. This ended up as a 3-point field goal and ended the first quarter.

In the second quarter, the Chargers made a touchdown and the extra point, putting the score 7-3. Kansas City got the ball back, and Patrick Mahomes had a big run for a first down, but there was a penalty against the Chiefs so it didn’t count. Then, later on that drive, the Chiefs got an impressive touchdown from Demarcus Robinson- Mahomes threw the ball 29 yards to Robinson, who was in between two defenders, and caught it. They also got the extra field goal putting the score 10-7 at halftime with the Chiefs in the lead. Before the half ended, though, Tyrann Mathieu, Chiefs safety, intercepted the ball in the end zone from Philip Rivers, the Chargers’ quarterback.

The second half was much more exciting than the first half. Los Angeles intercepted the ball from Patrick Mahomes at the beginning of the third quarter; it was Mahomes’ fifth interception of the season. Then the Chargers began getting into a rhythm and got a touchdown and extra field goal point; the score at that time was 14-10 with the Chargers in the lead.

On a kickoff to the Chiefs, wide receiver Mecole Hardman, caught the punt and ran for a touchdown of 104 yards- dodging players as he went. He almost went out of bounds too, but he managed to stay on the field. That was Hardman’s first kickoff return for a touchdown. The Chargers went nowhere when they got the ball back. But the Chiefs were good; they got another running touchdown. This time it was from running back Damien Williams for 84 yards. In the end, Tyreek Hill, wide receiver for the Chiefs, caught up to him just as in the game against the Minnesota Vikings in week 9.

The Chargers got another touchdown and an extra field goal. The score was 24-21 with the Chiefs in the lead. When the Chiefs got the ball back, Patrick Mahomes threw a nice 27-yard pass to Tyreek Hill. That drive ended up as a touchdown for the Chiefs. Damien Williams ran in for seven yards and got the touchdown, Kansas City also got the extra field goal- those were the last points of the game. The final score was 31-21.

Before the game ended, there was one more exciting play. The Chargers were definitely feeling the pressure and started dropping passes and just doing poorly. And they lost the chance to try to shorten the lead of the Chiefs when Daniel Sorenson, Chief’s safety, intercepted the ball and the Chiefs ran the clock down.

If the Patriots and Chiefs lost it would remain the same. The Baltimore Ravens are the number one seed in the division. The Ravens and Chiefs will sit out of the Wild Card games and won’t play until January 12, 2020. Meanwhile, the Patriots will go up against the Tennessee Titans.

Patrick Mahomes, Chiefs quarterback, completed 16 of 25, threw for 174 yards, threw for one touchdown, and one interception. He also seven carries for 21 yards. Chiefs safety, Juan Thornhill, had a knee injury during the game and is doubted to return for the playoffs. He is having an MRI Monday, December 30.