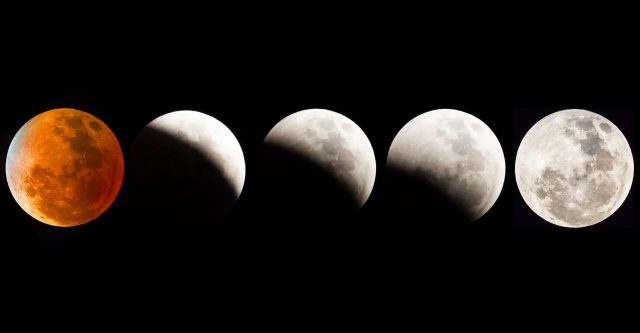 It’s been three years since most of North America saw a total lunar eclipse. It’s been 19 years since the last lunar eclipse was visible before midnight- start to finish- to a large part of the United States. [1] This all will change on Sunday night, January 20th,  when a super blood wolf moon will occur.

What is a “Super Blood Wolf Moon”?

The super blood wolf moon is a combination of three different lunar events happening at once. The supermoon, Wolf moon, and the blood moon will all be happening on Sunday night.

A supermoon occurs when the moons orbit is closest to Earth during its full phase. This makes it appear larger than usual.

A Wolf moon is what Native American’s called the first full moon of the year.

And a blood moon is when the sun, Earth, and moon all lineup, causing both, the earth to cast a red shadow over the moon, and a lunar eclipse to occur.

Unlike a solar eclipse, you won’t need glasses for this one. It’s safe to look at the eclipse with your naked eye. The eclipse will begin at 8:36 central time. For the next hour, the moon will take on a shadowed appearance. Then, at 9:34 PM, central time, the Earth will create a partial eclipse on the moon. By 10:41 the moon will be completely covered by the Earths shadow and become slightly red. [2]

The totality will last 62 minutes. Then the moon will move out of the Earths shadow and end the eclipse. Although the eastern side of the U.S. has the best view of the eclipse, the whole country will be able to see it. As long as cloudy weather doesn’t obstruct your view, you should be able to enjoy the super blood wolf moon. Or, if you’re going to bed early, you can still enjoy the super wolf moon.