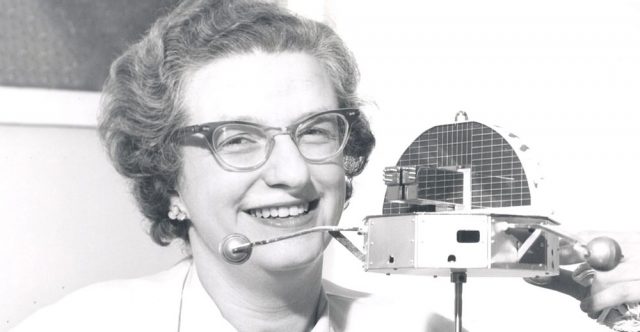 Dr. Nancy Roman, one of the nations top scientists in the space program, is shown with a model of the Orbiting Solar Observatory (OSO). Dr. Nancy Roman received her PhD in astronomy from the University of Chicago in 1949. (Photo by NASA)

Nancy Grace Roman died on a hospital bed on December 25th at the age of 93. Nancy Roman was the “mother of the Hubble telescope.” [1] Laura Verreau, Nancy Romans cousin, confirmed her death according to the Washington Post [2].

Nancy Roman was the first head of astronomy and the first woman in a power position in the newly created NASA agency. In 1959 she became the first woman executive for NASA. She became their first head of astronomy, and she would hold that position for twenty years. NASA credited her with leading the “first successful astronomical mission.” She also provided valuable insight for the Infrared Astronomical Satellite (IRAS) program.

Dr. Nancy Roman heavily lobbied for the creation and the launching of the Hubble telescope. In 1946 Lyman Spitzer, the author for the idea of the Hubble Space Telescope presented the concept for the telescope. The Hubble was launched in 1990. The Hubble telescope took over forty years to get from the drawing board to space. During that time Nancy Roman consulted with the NASA representatives who brought the idea before Congress. She also convinced the Bureau of the Budget to fund the Hubble.

She retired from NASA in 1979 and went off to teach astronomy to fifth graders in Shepherd Elementary School located in Washington. Her cousin, Laura Verreau, confirmed her death in December of 2018. Nancy paved the way for many of today’s female scientists.