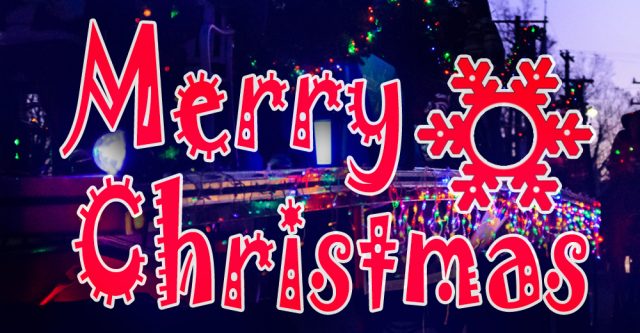 Alton, Mo. –Alton’s annual Christmas parade once again line the streets of Alton, Missouri, earlier this evening. On December 7, all sorts of floats, cars, horses, and even a semi-truck paraded around the streets of Alton as families and friends gathered at the edge of the streets, waiting for someone they know to pass.

With a change in pace from last year’s parade (and the year before that), this year’s Christmas parade wasn’t held at 10 a.m. as usual. Instead, the parade began lining up around 4 p.m., and just after 5 p.m., the parade started out of the high school parking lot. Various floats from churches, businesses, and the school passed with their passengers shouted out, “Merry Christmas!” throwing out candy as they passed. Some of the rides were decked out in lights, and others would have looked decked out in the daylight, but in the dusk, it was hard to even identify people.

Cars, polished and shiny, followed close behind, revving their engines. Then came the firetrucks, wailing on their horns, throwing candy at onlookers along with scattered “Merry Christmas’!”

Then, much to the crowd’s surprise came a Kenworth hauling a flatbed trailer that was decked with Christmas lights along with a (younger) Santa.

The horses came next, bringing up the rear, their riders wearing reindeer antlers in spirit of the holiday; following the horses came Santa himself, riding in a sleigh.

Merry Christmas to All!

Then, just as quickly as the parade began, it was over with; the cool 38-degree night air encouraged people to quickly disappear as soon as the last of the parade passed. Many went home, but some stayed to pick up a 5:45 p.m. dinner at The Lunchbox or the Japanese Steakhouse.

Afterward, the Alton Florists offered free apple cider as well as mystery coupons on all their items until 8:30 p.m. Other stores such as Style & Grace, Bless Your Heart Boutique, Christos House, and the Southern Bank were also open, offering exclusive deals to tonight.

We thank our local Culture Club as well as the Alton Chamber of Commerce for working hard to bring this parade to pass. Until next year! Merry Christmas!