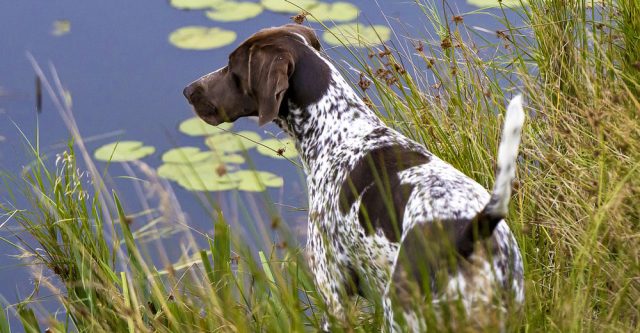 Corporal Alan Lamb and his canine, Tex, work for the Missouri Department of Conservation (MDC). Tex uses his tracking ability to help the MDC.

MDC K-9s do a lot of work. Some of the things they will do while with the MDC, is tracking, evidence recovery, search and rescue, wildlife detection, and public outreach programs. The MDC canine unit started in May of 2021, with five handlers and dogs- three Labrador Retrievers and two German Short-haired Pointers. [1] The canine unit had to go through nine weeks of training before they were assigned to their places.

Tex is a young dog, but he can smell things very well. He is a German Short-haired Pointer. Cpl. Lamb said of Tex,

The sky’s the limit as far as what Tex can be trained to detect. [2]

Working with the MDC isn’t all work. Corporal Alan Lamb said that Tex loves to play.

The highest value thing in Tex’s world, his highest vale reward is getting to play. [3]

Cpl. Lamb has been with the Missouri Department of Conservation for twelve years. When he heard about the new canine unit, he jumped at the opportunity and change of job.

The implementation of this canine program will help continue MDC’s mission of protecting Missouri’s fish, forest, and wildlife resources. [4]