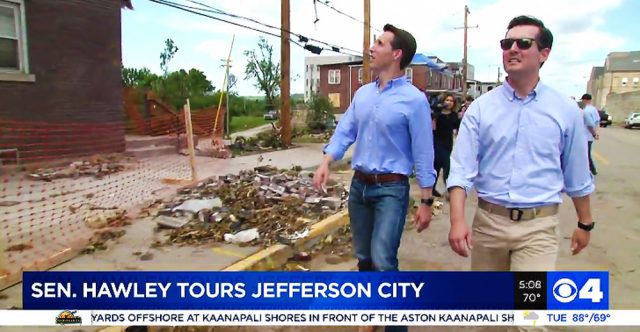 United States Missouri Senator Josh Hawley recently canceled a trip to the U.S. Mexico border to go to Jefferson City Missouri and check out the damage that severe storms inflicted on the city. Now, after touring the city, he’s working on getting Congress to approve a disaster relief bill which will help Jefferson City as it tries to recover from the recent tornado.

Last week Missouri was hit by heavy storms across the state, there were multiple tornados, and several cities experienced substantial damage. One of those cities was the state’s capital, Jefferson City. Senator Hawley quickly returned to Missouri to lend a helping hand when he heard the news of the damage the tornados had caused in Missouri.

Jefferson City was hard hit. But law enforcement, EMS, firefighters have been tremendous. And hundreds & hundreds of volunteers. pic.twitter.com/s9fiipFKHw

Checking out the Damage

On Wednesday evening a tornado hit southern Missouri. A three-mile area outside of the state capital was the hardest hit, according to Jefferson City Police Lt. David Williams [1]. Approximately 20 people were rescued after the tornado moved on, so far there have been no reports of anyone missing. Volunteers and city officials have been working together nonstop over the past few days to keep people taken care of throughout this trying time.

The damage in SW Mo is very significant. But what really struck me were the volunteers: well over 300 people showed up & registered to help yesterday alone. More today. Neighbors, friends, church members helping each other out. It’s incredible pic.twitter.com/86N1Mg9zNb