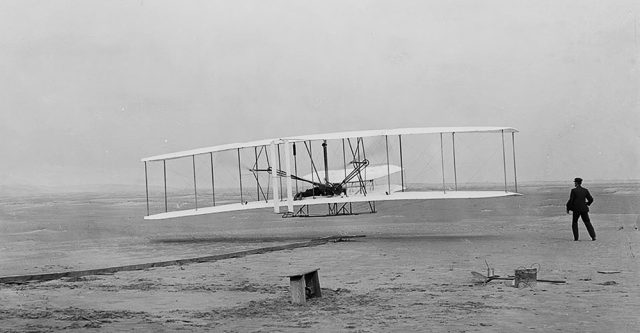 On December 17, 1903, the Wright brothers perfected their attempts for creating a flying machine. In Kitty Hawk, NC, the aircraft flew for 12 seconds and 120 feet. How did they get to this point? What drove them on?

Orville and Wilbur Wright grew up in Dayton, OH, predominately. Their father was a preacher who moved the family frequently. This was the final settlement for the family. Although not the head of the class at school, the boys learned many skills, among them entrepreneurship. Meanwhile, their mother encouraged them to investigate. This broadened their technical and engineering skills. While in high school, Orville built a printing press, which he and Wilbur ran. From there they open a bicycle shop. Together they experimented with ideas of making faster and lighter cycles. The shop did so well, they hired employees, thus freeing them up to work on what they really wanted: flight.

By the late 1890’s and early 1900’s, Wilbur and Orville were putting into action the ideas of flight. Starting with gliders, the brothers studied birds and tried to imitate them.

The flying apparatus had been tested at different places, including Chicago. However, after looking into the matter, The Wright brothers decided to move future flights to Kitty Hawk, NC [1]. This place was chosen based on steady winds and soft landing sand dunes.

Wilbur won the coin toss and was the pilot in NC. The aircraft pitched up and down, was under control, before loosing it and going down. The aircraft flew for 12 seconds over 120 feet. He flew against a freezing headwind. After the fourth flight of the day, winds tumbled the craft and it never went in the air again. Five people witnessed the event. The Wright brothers sent a telegram to their father exclaiming the good news. He informed the press. The press refused to publish anything, saying the flight was unimportant.

The famous aircraft that the Wright brothers flew in 1903 is on display at the National Air and Space Museum in Washington, D.C.