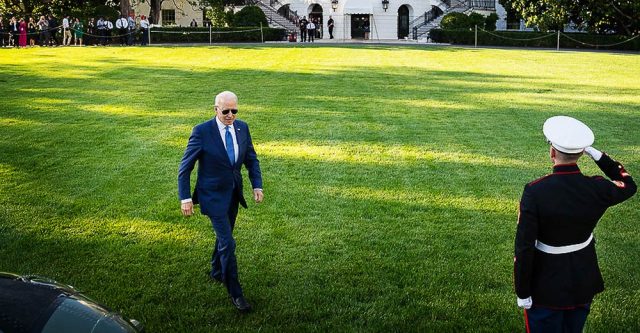 President Joe Biden prepares to board Marine One on the South Lawn of the White House, Friday, June 25, 2021.

President Biden, in an interview with ABC’s George Stephanopoulos, in an ABC exclusive report on Wednesday, was asked whether the U.S.’s exit from Afghanistan could’ve been handled better responded with “the government of Afghanistan, the leader of that government get in a plane and taking off and going to another country, when you saw the significant collapse of the Afghan troops we had trained…” and added “that’s simply what happened” as his answer.

When pressed on whether the U.S.’s exit from Afghanistan could have been handled better, Biden told Stephanopoulos, “The idea that somehow, there’s a way to have gotten out without chaos ensuing—I don’t know how that happens.”

Biden appeared to deny the situation in Afghanistan had been a failure when asked by Stephanopoulos whether “failure of “intelligence, planning, judgment, or execution,” contributed to the current state of affairs. He was warned by top military generals and many diplomats according to the WSJ not to commit to a “hasty withdrawal because it would undermine security in Afghanistan” and seems to be ignoring that advice.

EXCLUSIVE: Pressed on whether the U.S.’s exit from Afghanistan could have been handled better, Pres. Biden tells me, “The idea that somehow, there’s a way to have gotten out without chaos ensuing—I don’t know how that happens.” https://t.co/j2MYMUJcdKpic.twitter.com/ua9T2q9wal

The Biden administration pushed back the original pullout date set by the former Trump administration. The original date had been in May, but Biden pushed it to September 11 [1] of this year.

Critics ask whether or not the question was ever raised in the Biden administration on what would happen if the Taliban took ground quickly in the event of the new government caving from cowardice or worse. Did they listen to those views? Further, they say, chaos is not an acceptable plan and outcome.

Biden skirted the point that his administration and the Joint Chiefs had notice of the pullout before he came to office and an additional 5 months to prepare. Even Chairman of the Joint Chiefs of Staff Army Gen. Mark Milley warned Biden [2] to keep troops to help with stability while at the same time conducting diplomacy between Afghan factions to arrive at a peaceful solution.

The Biden administration appears to have put the U.S. southern border crisis, the current China threat to Japan and Taiwan concerning “Live Fire” exercises [3] in the South China Sea, violence in the large cities of the U.S. among other crises on the back burner.

The U.S., under Biden, is focused on masks and telling governors to obey or be sued [4].