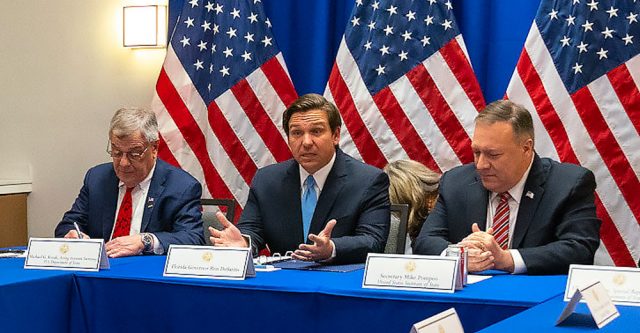 Florida Gov. Ron DeSantis is standing up for the rights of Florida’s citizens and is enjoying the benefits of a boom of sorts.

“Everyone told me I was wrong,” DeSantis said in a fundraiser on Tuesday, pointing out his well advised response to the pandemic. “I faced continued pressure from radical Democrats and the liberal media, but I refused to back down. It’s clear: Florida got it right [1].”

The unemployment rate in Florida is 4.8%, according to the latest figures from the US Bureau of Labor Statistics, compared to 6.8% in Texas, 8.8% in New York and 9% in California.

On The Disregard of Law

DeSantis was on Justice with Judge Jeanine a couple of weeks ago [2] and pointed out that Florida’s response to anarchy would be different than other states saying, “We’re targeting local governments. If they try to … indulge in these kinds of insane fantasies like defunding law enforcement, the state will take action and defund them as municipalities. And also, if you’re involved in rioting or looting or any of this: you’re going to jail. You want to talk about bail? We’re obviously not going to eliminate bail like these crazy states will do, but if you’re involved in a violent assembly, you’re not getting bail. You gotta stay in jail until you go in front of a judge, and I think that that is going to be a good disincentive.”

Wrapping up on the subject of scofflaws in the states, “But as we look forward, I think you’re going to see more of this around the country and we’re setting a marker down in Florida. We’re not tolerating it, and anybody that wears a uniform, don’t have any doubt: the state of Florida stands with you.”

Summing up his approach as governor: “we just tried to look at the whole society. We wanted to look out for everybody,” DeSantis continued, “We viewed this as a virus that was particularly dangerous for elderly people but not as dangerous for younger people, so we did the opposite on nursing homes: we banned hospitals from sending infected patients to nursing homes. We also did things like prioritize our seniors for vaccinations. But we had kids in school; it’s very important that they have the opportunity to go to school in person. We also saved the economy from collapse; our unemployment rate right now is 4.9 %. So we did all those things even with one of the most elderly populations in the country and our per capita COVID mortality is less than the national average and far less than lockdown states like New York, New Jersey, and Illinois.”

That’s what a statesman looks like. Prudent actions. Yes, the virus was frightening in the beginning but by mid-2020 the data started rolling in, and states like Florida, Texas, and Missouri took a look at the data and declined to oppress the people of their states.

The End of Federalism?

Trump tried to act in a limited way allowing states to call the shots for their citizens even in the case of outright “armed insurrection” in Oregon and Washington. However, the Biden administration with help from the Democratically controlled House and Senate is pushing the boundaries of federalism. The southern border, gun-control, trying to take over elections from the state legislatures, executive orders about all sorts of things the federal government has no business engaging in especially when they break current federal law. The list goes on.

When asked by Judge Jeanine about the recently-passed $1.9 trillion COVID-19 relief bill, DeSantis argued “We are getting penalized by about $2 billion because we have low unemployment, because we saved the economy, because also we have lower COVID mortality than a lot of these lockdown states. So what this bill does is say, ‘If you locked down, if you destroyed your state; if you destroyed your economy, and you failed to stop COVID as well, you’re going to get a windfall.’ Some of these lockdown states are getting an extra billion, two billion, three billion dollars, so it’s effectively a transfer of money from states like Florida and Georgia to states like New York, Illinois, and California. It stinks to high heaven.”

We The People Give Government Rights, Not The Other Way Around

What this monstrosity of a government (it sure is stretching the boundaries to call it “federal”) doesn’t seem to understand is that man (both male and female) has been endowed by our creator with these rights. There are a whole bunch of them. They are practically unlimited and in the sense they are limited in the people is only by “religion and morality”. The only rights given by anybody other than “nature’s God” are from the people to the government. They are enumerated and limit what the government can do. No government “gives” them to us. We better get this right.

The schools and universities have been indoctrinating us for over a hundred years with this gibberish that if the government says so, it must be right.

When the government trespasses on our rights we MUST stand against that government. It is our duty to our country, our fellow citizens, our posterity and all witnesses on earth and in heaven (read the Declaration in case you think I’m being controversial.) To act in any other manner when the current “federal” government is, figuratively, punching you, your wife, your neighbors, and your children in the nose is cowardice.

Good for DeSantis and men like him. Tell it like it is and don’t back down. This “federal” government needs to be put back into its “Constitutional Cage” immediately.