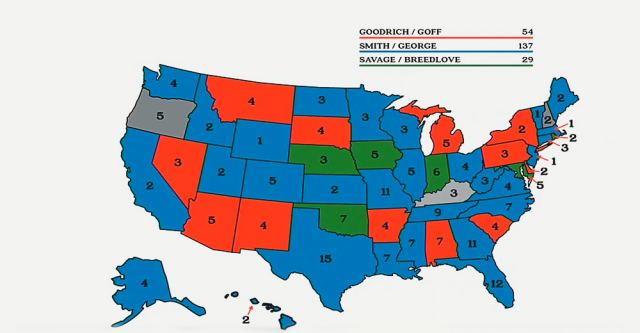 TeenPact Leadership Schools is a organization that teaches homeschoolers about the political process, government, and how to be a Christian leader. After a student has attended a four-day state class, they are invited to come to a nationwide National Convention held in Tennessee every May. National Convention is often called “the heart of TeenPact” with inspirational worship, small groups, and a national election. This years 2022 TeenPact Leadership Schools president is Corban Smith, a Missouri student.

TeenPact students across the United States gear up to run as representative, senator, vice president, or president at National Convention. They start their campaigns with social media and later on, shirts and bracelets.

Once the students feel led to run for an office, they can choose a party they want to be in: Compassion, Vision, and Perseverance.

The seven hundred-plus students at National Convention had to choose in the general election 9 out of 27 representatives, 4 out of 12 senators, and 1 out of 3 presidential tickets.

The Smith-George ticket got all the swing states including Texas, Georgia, and Florida.

Unlike the 2021 election where it wasn’t until the last state that the student-body knew their next president and vice president, the Masters of Elections were able to call the election about 3/4 through the states. In the end, the Savage-Breedlove campaign had 29 electoral college votes and the Goodrich-Goff campaign had 54 electoral votes.

President Smith and Vice President George both talked about in their respective debates about their executive order. They want to create a YouTube channel so TeenPacters can get connected across the nation.

While Corban Smith got the presidency, two other Missouri students also got elected into office. Finley Smith (brother to Corban Smith) won a representative seat and Brad Heredia won a senate seat.