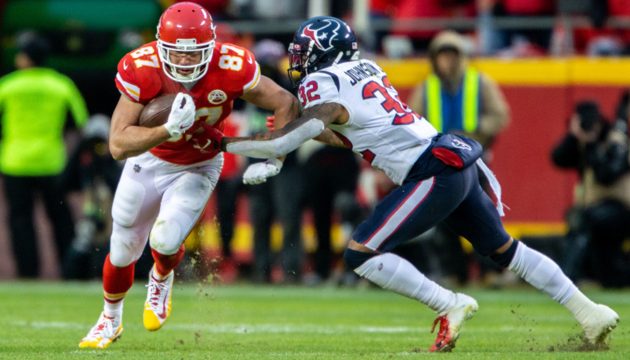 Kansas City, Mo. – The Kansas City Chiefs went up against the Houston Texans on January 12, 2020. The Chiefs won 51-31. Now the Chiefs are going to the AFC Championship Game, which is January 19. There was also some worry that Travis Kelce would not play in this game due to an injury, but he did play as if he wasn’t injured.

The Texans haven’t started fast all season, but this game they came in fast and strong. Just in the first three minutes of the game, they made a touchdown and scored a field goal. When the Chiefs got the ball, they dropped it to many times, and in the end had to punt it. When the Chiefs punted the ball, the Texans blocked it and returned it for another touchdown and an extra point. On the Chiefs next drive, Patrick Mahomes, Chiefs quarterback, had a good play. He faked a handoff to the running back then threw a short pass to Travis Kelce, the Chiefs tight end. The Chiefs did manage to hold the Texans to a punt. They put wide receiver, Tyreek Hill, in, but he messed up and fumbled the ball, and the Texans recovered it at Kansas City’s 6-yard line. But the Chiefs got nothing on their drive. To end the first quarter, the Texans got another touchdown and an extra field goal, putting the score 21-0.

Chiefs Show Who They Are

Houston got another 3-point field goal to open the second quarter. That was the last time the Texans scored some points until the third quarter. When the Texans kicked off the ball to the Chiefs, wide receiver, Mecole Hardman, returned it for 57 yards. That got the Chiefs going and into a rhythm. The Chiefs got a touchdown from Damien Williams and the extra field goal point. They held the Texans to a punt again, but when they “punted” it, they faked it and tried to get a first down. But a Chiefs player tackled him before he got the first down. When the Chiefs were going to have to punt it, there was a flag on the Texans and the ball was placed at where the foul occurred, which was at the Texans 5-yard line. They got a touchdown from Travis Kelce and the extra field goal. The score at that point was 24-14, with the Texans still in the lead.

When the Chiefs kicked off the ball to Houston, the Texans receiver got hit hard on a tackle, and the ball popped out right into Darwin Thompson’s hands, a Chiefs defensive player. The Chiefs got a touchdown from that from Travis Kelce again. They also got the extra point. The Chiefs got three touchdowns in three minutes twenty-four seconds. The Texans got the ball back, but it ended up as nothing. When the Chiefs got the ball back, Patrick Mahomes had a good run of 21 yards. That drive ended up as another touchdown from Travis Kelce, and they also got the extra point. The score at halftime was 28-24 with the Chiefs in the lead. Both teams had 52 points combined, which was the most in the first half in any game in postseason history.

Only four teams have come back from 24+ points in the postseason. The Chiefs had the ball to begin the second half. They had another nice play from Patrick Mahomes to Sammy Watkins. Mahomes threw it 43 yards to Watkins, who caught it. Kansas City got another touchdown from Damien Williams, but they missed the extra field goal. Right before the first half ended, Travis Kelce left early with a hamstring injury. Kelce did return into the game and was just as productive as before. The Chiefs got the ball back from the Texans and got a touchdown from Damien Williams, and they did get the extra field goal. The score was 41-24 with the Chiefs in the lead.

The Texans finally got out of their shock from every part of the Chiefs team and tried to make a comeback starting with a touchdown and the extra field goal. Kansas City matched it with another touchdown. This one from Blake Bell and they got the extra point. The Chiefs had seven straight touchdown drives during this game. The Chiefs made the last points of the game, which was a 3-point field goal. The final score was 51-31 with the Chiefs winning big. The Chiefs are the first team to win by twenty points after trailing by at least twenty points in a postseason game.

Patrick Mahomes had a slow start in the first quarter but came back as explosive as ever in the second quarter. This was his second game this season with four pass touchdowns in the second quarter. The first one was on December 1 against the Oakland Raiders which the Chiefs won 40-9. Mahomes completed 23 of 35, threw for 321 yards, threw for 5 touchdowns, and had seven carries for 53 yards. He had the most rushing yards for the entire team. The Chiefs even ran out of touchdown fireworks they made so many touchdowns.  [1] Patrick Mahomes is the only quarterback to throw for more than 300 yards, threw for 5 touchdowns, and rush for 53 yards.

The Chiefs are moving on to the AFC Championship Game January 19 against the Tennessee Titans. The game will be at Arrowhead Stadium and it will begin at 2:05 pm Central Time. The Titans are the only thing in their way to go to the Super Bowl in more than 50 years.