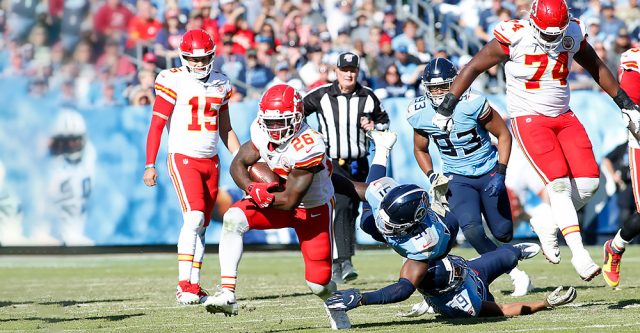 Nashville, TN. – The Chiefs went up against the Tennessee Titans last Sunday, and their star quarterback, Patrick Mahomes, played for the first time since he dislocated his kneecap in a game on October 17. Even though they had Mahomes, they still were not able to win this game- the ending score was 35-32, with the Titans winning.

When Kansas City got the ball back, Darrel Williams fumbled it, and the Titans got a touchdown from it. After that, Tyreek Hill, Mitchell Schwartz, and Martinas Rankin got injured or at least got shaken up. Hill turned out to be okay and came right back into the game. Schwartz and Rankin were taken out of the game and checked over. The Chiefs got another field goal, putting the score to 13-13 at halftime.

Kansas City had the first points after the half, getting a touchdown pass to Tyreek Hill- they missed the field goal. The Tians got a touchdown, and the Chiefs made another 3-point field goal before the third quarter ended.

The score at the end of the third quarter was 22-20 with the Chiefs in the lead. Kansas City got a touchdown which was made by a pretty impressive pass. The defense was surrounding Mahomes so he jumped up and threw the football to Mecole Hardman, who caught it then turned on his speed and got the touchdown. The Titans got two more touchdowns, a one-point field goal, and a two-point conversion. The Chiefs only got a 3-point field goal. For the field goal that they could have made, and would’ve lengthened the gap by 8 points, the ball holder was not ready and threw the ball away- costing the Chiefs dearly. The Titans won 35-32.

Patrick Mahomes, Chiefs quarterback, completed 36 of 50, threw for 446 yards, and threw for three touchdowns. Dustin Colquitt completed 0 of 1; when he threw the ball away on a field goal attempt.

The Chiefs are going to Mexico November 18 to take on the Los Angeles Chargers. The game will start at 7:15 pm Central Time.