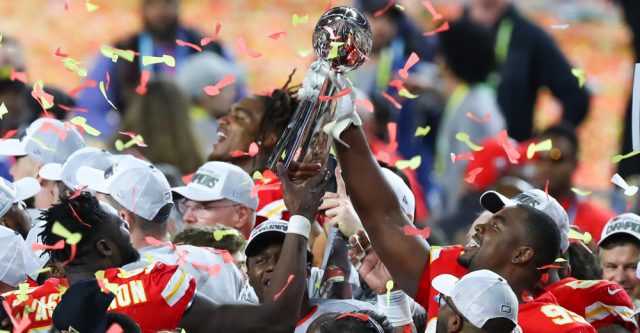 On a punt from the Chiefs, the 49ers receiver fumbled the ball but quickly recovered it. The 49ers drive ended as a 3-point field goal. For the Chiefs’ second drive of the game, at the endzone, Patrick Mahomes, the Chiefs quarterback, ran and slid to get the first down, but not quite. A 49ers defensive man knocked the ball out of Mahomes’s hands, and the ball went out of bounds. On the next play, the Chiefs did a trick play. DeMarcus Robinson, Damien Williams, Sammy Watkins, and Patrick Mahomes were lined up behind the offensive line; then they did a synchronized spin where Damien Williams, running back, received the direct snap getting the first down. Offensive coach Eric Bieniemy later said that it was from the 1948 Rose Bowl. Patrick Mahomes then ran in for the touchdown on the next play moving the score 7-3 with the Chiefs in the lead.

To start the second quarter, Chiefs safety Bashaud Breeland, intercepted the ball from the 49ers. Jimmy Garoppolo, the 49ers quarterback, got hit hard but was okay. Driving down the field, Patrick Mahomes, quarterback for the Chiefs, and Damien Williams, the running back for the Chiefs, ran in the same direction and when Mahomes was about to be tackled he tossed it to Williams who got the first down. The drive ended up as a 3-point field goal. The 49ers came back and tied the score 10-10 with a touchdown and the extra field goal. On the kickoff to the Chiefs, Mecole Hardman, Chiefs wide receiver, got hit and appeared hurt. He came back later and looked to be good. The score at halftime was 10-10.

In the third quarter, Bashaud Breeland got injured but came back in. The 49ers started getting a lead over the Chiefs. To start it off, San Francisco got a 3-point field goal. Then the 49ers intercepted the ball from the Chiefs. It was Patrick Mahomes first career postseason interception. The 49ers then got a touchdown and the extra field goal, putting the score 20-10.

In the fourth quarter, the Super Bowl Most Valuable Player voting was open. San Francisco intercepted another Chiefs’ throw. The 49ers’ drive ended up as nothing, though. On third and 15, Patrick Mahomes threw a beautiful 44-yard pass to Tyreek Hill to get them closer to the end zone. Later Mahomes threw to Travis Kelce who got the touchdown. The score was 20-17 with the 49ers still in the lead. Then the Chiefs we knew all season long and last year as well, showed up. The Chiefs got two more touchdowns both from running back Damien Williams. On the second touchdown, Williams dodged some 49ers players then outran them 38-yards into the end zone for another touchdown. The score was 31-20 with the Chiefs in the lead. The 49ers tried to come back, but Kansas City intercepted the ball and ran the clock down, winning their first Super Bowl in 50 years.

Patrick Mahomes completed 26 of 42, threw for 286 yards, threw for two touchdowns and two interceptions. He also rushed 9 times for 29 yards and had one rushing touchdown.