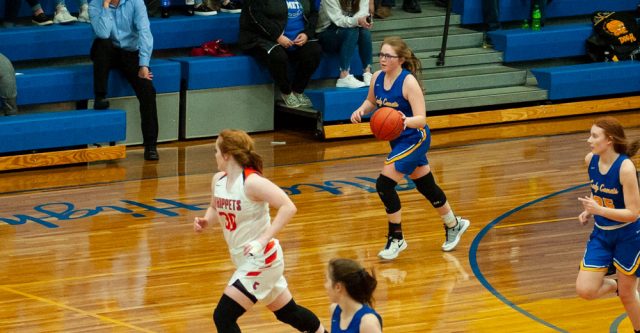 ALTON, MO - JANUARY 28: Alton Comets Evin Montgomery (34) dribbles the ball down the court to the basket against the Ellington Whippets on January 28, 2021 at the Alton High School Gym in Alton, Missouri. (Photo by Curtis Thomas/AltonMo.com)

Alton, Mo. – The Alton Comets varsity girls basketball team went up against the Ellington Whippets on January 28, 2021, at the Alton High School Gym for the Big Springs Conference (BSC) Tournament. The Whippets won 73-37.

Whippets Get A Lead

The Whippets started the game with two two-pointers from Dylan Price (#24 for Whippets). Gracetyn Warren (#25 for Comets) put the first points for the Comets on the board with a two-pointer. The score was then 6-2. The score at the end of the first quarter was 27-7 with the Whippets in the lead.

Longer Lead For The Whippets

Comets Slow Down The Whippets

In the fourth quarter, the Comets slowed the Whippets down to only 6 points. Jayden Mock (#23 for Comets) along with some of her teammates, made a two-pointer. The Comets’ effort was not enough to beat the Whippets. The final score was 73-37 with the Whippets winning.

The Ellington Whippets will go up against the Emminence Redwings on Saturday, January 30, 2021, at the Alton High School Gym at 4:30 pm.