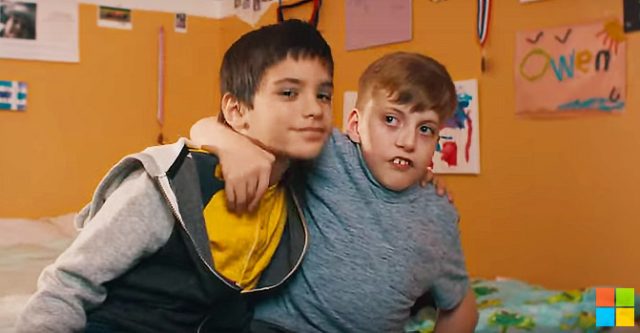 “We All Win” (Photo from Microsoft ad)

2019’s Super Bowl took place Sunday at Atlanta, Georgia. Every Super Bowl has commercials, and everyone usually likes the commercials. This year’s ads didn’t live up to everyone’s expectation, which is to be expected, but there were still a few commercials that made it into the top five best commercials.

Are we Watching a Game or the Commercials?

For a cost of $150,000 per second, you would expect some mind blowing commercials being played throughout Super Bowl LIII. Instead, most of the commercials were almost as dull as the game, letting us all down again.

There were a few commercials that managed to stand out though, including “We All Win” by Microsoft and Audi’s “Cashew” ad.

So what ad’s made the “top five best” you ask? That depends on who you ask. Here we managed to compile a list of the five best Super Bowl commercials. Then again- if you ask someone else which ones were the best, they might tell you something different.

“Joust” by Game of Thrones was ranked number 5, barely making it to the top five. Maybe it’s because of some of the Bud Light characters dying?

“Cashew” by Audi 3 was an exciting commercial that gave you whiplash with the turn of events. Really, it was shocking, uh, electrifying if you will.

“Serena Williams” played in a Bumble commercial, catching everyone off guard because Bumble isn’t a Sports app but Serena Williams is a sports queen.