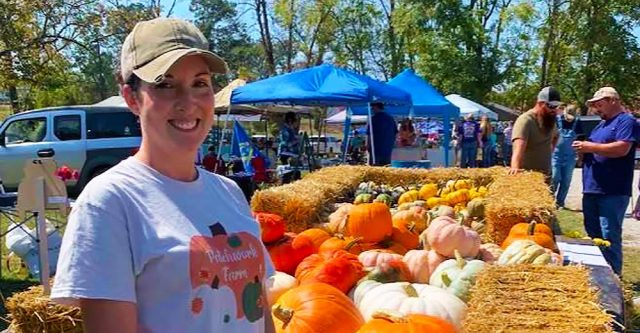 Stefanie Hobson of Patchwork Farms shows off her beautiful pumpkins, squash and mums.

Alton, Mo. – The 2nd Annual Hutton Valley Fall Festival, which was held on September 26, 2020, was a huge success this year with plenty of music, foods, activities, and so much more.

There were two music performers during the festival so you were never out of music. The music was played in the shade so guests could sit comfortably in the shade.

There was plenty of food including funnel cakes, fresh-squeezed lemonade, BBQ nachos, walking tacos, kettle corn, and so much more!

There were also plenty of games and activities that both adults and children could enjoy. Some games that were included are face-painting, a friendly therapy dog, a candy-filled pinata, and many more activities. There were also two gun raffles that went on.

There were also two dance companies that performed at the festival. One of the dance companies, Children’s Ballet of the Ozarks, gave a demonstration of the upcoming Peter Pan Ballet. The other dance company, On the Floor Dance Studio, gave a fantastic performance with their cloggers.

Neighborhood Christian Schools is pleased to announce that the winner of the AR-15 Raffle is Howell County’s Sherrif-elect, Brent Campbell. Mr. Campbell bought his tickets during the Hutton Valley Independence Day Pie Social. The winning ticket was drawn on Facebook live during the Hutton Valley 2nd Annual Fall Fest. It was presented by Joel Hinds of NCS and Rachel Wood of C&R Gun Ammo & Pawn.

The Hutton Valley Neighborhood Watch planners expect an even bigger turnout next year for the 2021 Fall Festival.