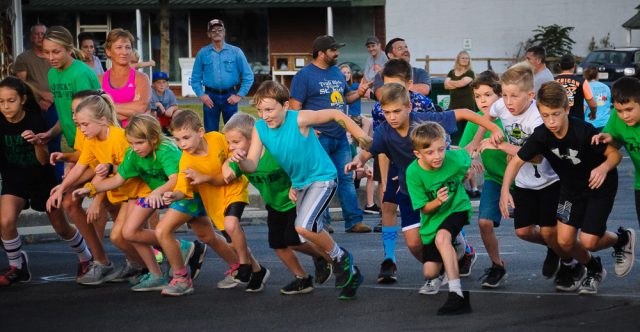 And the runners are off.

Alton, Mo. – On Friday, October 4, 2019, participants lined up on the square for the one-mile run. Immediately following that run, was the 5k run.

All About The Runs

At 6:00 pm, right on the square registration began. Those who had already registered could check-in for a free tee-shirt. Others were welcome to register at that point. At 6:30, the athletes lined up for the beginner’s run. The four-wheelers led the way along the path, around the square, and town.

Many residents came out to cheer on the runners. Walking was allowed. After the final runner crossed the line, the 5k run participants lined up. They, too, followed a four-wheeler. Although the sun was going down fast, the runners were not to be deterred; nor was the audience.

What Else Happened Friday Night

While all this was going on, the cornhole tournament was taking place on the square, also. A fun favorite for people of all ages, skill, and patience were demonstrated as each player tried to sink the bean bag. Several games were going on at the same time as a crowd watched and cheered on.

How About Some Music

Meanwhile, all this time, music was played over the speakers on the square. Dancing on the square is likewise scheduled for Friday night until 10:30 pm.

All of this is the start of the 34th Annual Black Gold Walnut Festival. Tommorrow the official fun, games, and booths full of merchandise and food will line the streets around the Alton courthouse. AltonMO.com will be there and we hope to see you around!