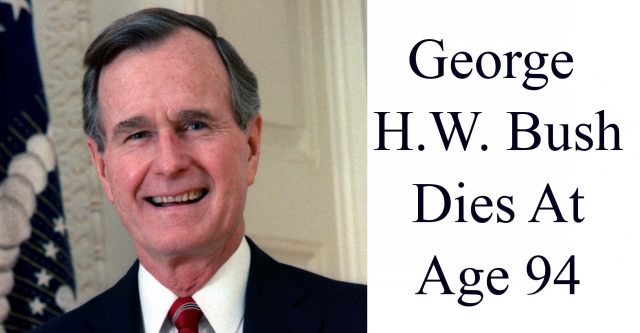 George Bush, the forty-first president of the United States, died today at age 94. His death was announced by his office on the morning of December first. The news of his death came a short eight months after the death of his wife, Barbara Bush.

George Herbert Walker Bush, or, H.W. Bush Served as the United States 41st president. Before that, he served as the Vice President for Ronald Reagan. He was a Republican and served the country for many years. He was an Ambassador of the U.S., and at one point he was the director of the Central Intelligence Agency.

He had a son, George W. Bush, who became the 43rd president of the United States.

H.W. Bush had a type of Parkinson’s disease that confined him to a wheelchair, and slowly, in the months following his wife’s death, his health deteriorated. Until on December 1st, Former President, H.W. Bush, died at age 94.

Although he may not have been the best president, or the worst, we still pay respect at the news of his death.

“George H. W. Bush was the best one-term president the country has ever had, and one of the most underrated presidents of all time,” James A. Baker III, the former secretary of state and Mr. Bush’s closest adviser for nearly 50 years, said in an interview in 2013. “I think history is going to treat him very well.” [1]