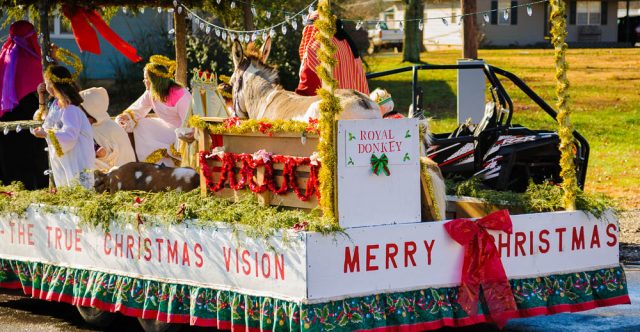 Alton, Mo. – 2018’s annual Alton Missouri Christmas parade was held again this year. December first all the floats, cars, horses, and people lined up to parade around the square. Families stood at the edge of the streets, waiting for a family member in the parade to pass, or maybe they were just waiting for candy. Here are some more details in case you missed anything.

Maybe it’s because there are prizes for best-decorated float in each category, but there’s always a bunch of floats in the parade. This year was no different, with floats from various churches in the area, to the boy scouts, as well as assorted other floats participating in the Alton Christmas parade.

Older cars, polished to perfection, had joined the parade as well. Not quite as decked up in Christmas gear as some of the other vehicles, they still managed to make an impression with their gleaming chrome.

Is a parade really a parade without firetrucks? The volunteer fire department showed up with candy and wreaths for the Alton Christmas parade.

The Scouts Were There Too

The scouts showed up as well, both, the Crazy Girls For Scouts, and the boy scouts. The boy scouts towed an old car and a large Christmas tree with them in the parade.

Unicorns really do exist. We saw this lovely little unicorn get her hooves painted a glittery gold before the parade began. Also, check out our favorite two ponies, Sunny and Pete, hauling the Grand Marshals (Philip and Juanita Jett).

Santa Claus is a mysterious figure, is his name really Santa? What does he do for the rest of the year? And why a red suit? We got to talk to Santa in the Alton Christmas parade, and he spilled some secrets about his daily life. His name is Herman for most of the year. He works at the local volunteer fire department when he’s not going down chimneys. Herman also is Santa for special occasions throughout the holidays; if you have a Christmas party and want Santa around, he’s your guy. This was his fifth year in the parade.  And this Santa doesn’t just sit in a sleigh all day, he goes to the headstart building and sits with the kids there. (The girls want guns, and the boys want atv’s for Christmas.)

A parade isn’t really worth putting on if not for an audience. Thanks for showing up, even if you might’ve just gone for the candy.