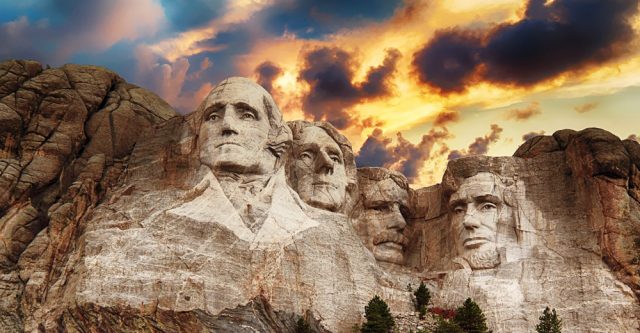 Whether you’ve been to South Dakota or not, chances are that you’ve heard of one of the U.S.’ most noteworthy landmarks, Mount Rushmore. Built in 1941, the monument is eighty years old, and most of the almost 400 workers who helped build the memorial have passed away. But not everyone is dead, the last living carver of the landmark, Nick Clifford, celebrated his 98th birthday on Monday, July 8, saying that he “plan[s] on living to quite a while yet.” [1]

In October of 1927 Mount Rushmore began its long construction process, nearly 400 people came to help put up the monument, working as call boys, carvers, drillers, blacksmiths, and housekeepers. By October 1941, the national landmark was completed.

In the time since its completion, its number of live creators has steadily been decreasing, until now, only one remains. Nick Clifford has been the lone survivor of those who helped build Mount Rushmore for the past 12 years and, according to him, he doesn’t plan on going on with them anytime soon. “They’re all gone now. I’m the last one, so I’m happy that my health is good, and I plan on living to quite a while yet,” Clifford said.

On July 8 Clifford celebrated his 98th birthday in South Dakota, surrounded by friends and family who had traveled from across the nation.

His wife of 45 years, Carolyn, says that even though time has passed, he’s still leaving his mark on the world. “He’s been a wonderful man. He’s very kind and generous, and somewhat shy,” she said. “You wouldn’t know that since he’s in the public, but he enjoys what he’s doing a lot.”

Years ago they wrote and published their own book about Mount Rushmore, and Clifford continues to sign copies of the book for visitors at the park.