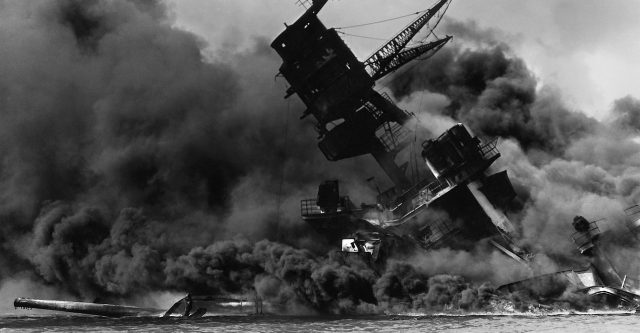 December 7 is National Pearl Harbor Remembrance Day, a day where Americans take a moment to remember those who died in the attack at Pearl Harbor and honor those who have served in the U.S. Military and those who are currently serving in the military.

In honor of National Pearl Harbor Remembrance Day, President Donald Trump issued a Presidential Proclamation that briefly pointed out the bravery of the men and women at Pearl Harbor and the courage and resilience of the U.S. military today. Despite being stunned by the surprise attack, Americans managed to band together and fight off tyranny. Sixteen million American servicemen went overseas to fight for victory after Pearl Harbor, and over 400,000 men and women never returned home.

Trump urged Americans to observe December 7 of remembrance for our military and encouraged both businesses and individuals to fly the United States flag at half-staff to honor those who died serving at Pearl Harbor.

You can read his full proclamation below:

Seventy-eight years ago today, the course of our Nation’s history was forever altered by the surprise attack at Pearl Harbor on Oahu, Hawaii. On National Pearl Harbor Remembrance Day, we solemnly remember the tragic events of that morning and honor those who perished in defense of our Nation that day and in the ensuing 4 years of war.

Just before 8 a.m. on December 7, 1941, airplanes launched from the Empire of Japan’s aircraft carriers dropped bombs and torpedoes from the sky, attacking our ships moored at Naval Station Pearl Harbor and other military assets around Oahu. Following this swift assault, the United States Pacific Fleet and most of the Army and Marine airfields on the island were left decimated. Most tragically, 2,335 American service members and 68 civilians were killed, marking that fateful day as one of the deadliest in our Nation’s history.

Despite the shock of the attack, American service members at Pearl Harbor fought back with extraordinary courage and resilience. Sprinting through a hailstorm of lead, pilots rushed to the few remaining planes and took to the skies to fend off the incoming Japanese attackers. Soldiers on the ground fired nearly 300,000 rounds of ammunition and fearlessly rushed to the aid of their wounded brothers in arms. As a solemn testament to the heroism that abounded that day, 15 American servicemen were awarded the Medal of Honor — 10 of which were awarded posthumously. In one remarkable act of bravery, Doris “Dorie” Miller, a steward aboard the USS West Virginia, manned a machine gun and successfully shot down multiple Japanese aircraft despite not having been trained to use the weapon. For his valor, Miller was awarded the Navy Cross and was the first African-American recognized with this honor.

In the wake of this heinous attack, the United States was left stunned and wounded. Yet the dauntless resolve of the American people remained unwavering and unbreakable. In his address to the Congress the following day, broadcast to the Nation over radio, President Franklin Delano Roosevelt assured us that “[w]ith confidence in our armed forces, with the unbounding determination of our people, we will gain the inevitable triumph.” In the days, months, and years that followed, the full might of the American people, industry, and military was brought to bear on our enemies. Across the Atlantic and Pacific, 16 million American servicemen and women fought to victory, making the world safe for freedom and democracy once again. More than 400,000 of these brave men and women never returned home, giving their last full measure of devotion for our Nation.

While nearly eight decades have passed since the last sounds of battle rang out over Pearl Harbor, we will never forget the immeasurable sacrifices these courageous men and women made so that we may live today in peace and prosperity. We continue to be inspired by the proud legacy left by the brave patriots of the Greatest Generation who served in every capacity during World War II, from keeping factories operating on the home front to fighting on the battlefields in Europe, North Africa, and the South Pacific. Their incredible heroism, dedication to duty, and love of country continue to embolden our drive to create a better world and galvanize freedom-loving people everywhere under a common cause. On this day, we resolve forever to keep the memory of the heroes of Pearl Harbor alive as a testament to the tremendous sacrifices they made in defense of freedom and all that we hold dear.

The Congress, by Public Law 103-308, as amended, has designated December 7 of each year as “National Pearl Harbor Remembrance Day.” [1]

I’m not sure why but this site is loading very slow for me.
Is anyone else having this issue or is it a problem
on my end? I’ll check back later and see if the problem still exists.

Hi Alex. We are not experiencing any issues on our end. Please let us know if the situation continues on our contact us page.