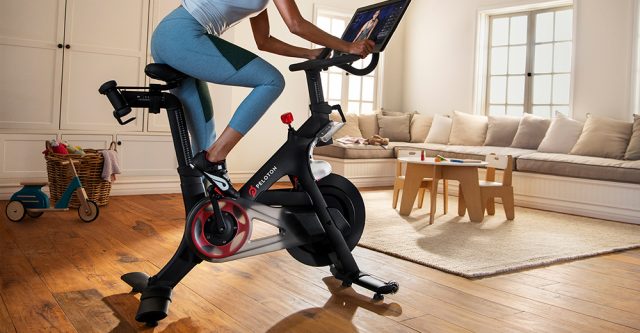 So proud that this poor wealthy woman went from a size two to a sweatier size two, what a journey

After Peloton released an ad featuring its $2,245 Peloton bike it was met with taunts and backlash about the “unhealthy” dynamic between the husband and wife in the commercial. Peloton saw its stock drop 9 percent within days of releasing the commercial- erasing $942 million from its market value. But was the ad as bad as all the Twitter users make it out to be? Not hardly.

“The commercial follows a woman’s yearlong fitness journey after her husband gifts her one of the company’s expensive stationary bikes, ending with the woman thanking her husband for changing her life,” describes People. [1] But an inspirational fitness journey wasn’t enough to satisfy Twitter users who mocked the ad, calling out a supposed message behind the commercial of a husband wanting his already fit wife to lose weight.

“Peloton. Because no matter how thin she is, she can stand to lose 10.” https://t.co/RPoFOpXm05

The idea that it’s offensive for a husband to gift his wife, who is into fitness, with a luxury stationary bike is comparable to saying gifting a mom who loves cooking a Kitchen-Aid is offensive. And in the commercial, the woman is clearly not upset. Excited? Yes. And a bit nervous, as she says in one of her vlogs.

Besides calling out the husband’s alleged fat-shaming, naysayers also pointed out the expensive atmosphere of the commercial, claiming it makes Peloton seem smug and out of touch with its customers. The opposite is true however, Peloton knows exactly who its customers are and those who can afford a $2,245 bike probably won’t be living off the average $60,000 annual salary in a small, crowded home.

Fitness has quickly become a nearly $100 billion global industry with fitness wear and gyms on every corner in major U.S. cities.  And although $2,245 sounds like a hefty price tag for a bike, a single SoulCycle class cost $34- with $3 shoe rental- after attending about 60 classes, your Peloton bike has paid for itself.

I had my carpenter build a $9,000 finished wood riser for my Peloton bike in my glass-enclosed zen garden/home gym pic.twitter.com/VJSOjctYtO

“Our holiday spot was created to celebrate that fitness and wellness journey,” a Peloton spokesperson said, standing by their controversial commercial. “While we’re disappointed in how some have misinterpreted this commercial, we are encouraged by — and grateful for — the outpouring of support we’ve received from those who understand what we were trying to communicate.”

Analysts from Raymond James, an investment banking company, told CNBC that the 9 percent drop would not affect the company in the long run.

“While reactions to the holiday ad are disappointing, we do not expect it will adversely affect holiday demand,” the analysts said. “We do believe Peloton may review its marketing strategy, given the frequency in which its ads are parodied on social media.” [2]