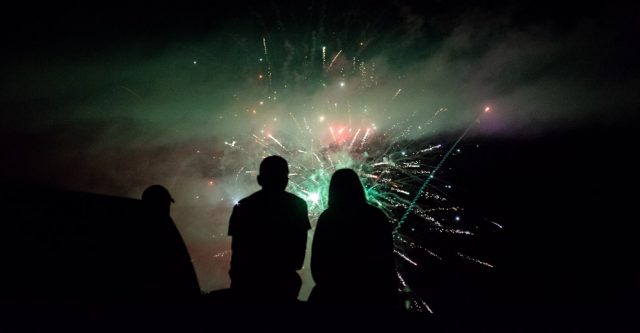 People silhouetted by the fireworks.

Alton, Mo. – Last night Alton held their stunning fireworks display. Piney Creek Parks was the location of the fun. Many families and people of all ages arrived at the park in plenty of time to reserve their seat to watch the display. And AltonMo.com was on the scene to tell you what was happening.

Which Candidates Were There?

A diverse assortment of booths were set up before the event.  Onlookers could speak with candidates, buy food and snacks, or play games. As a favorite place for candidates running for office, Alton was no stranger to these persons. Four candidates manned booths last night: Betty Greene, William Hass, Judge Allen, and Henry Smith.Voters could talk with these people and begin making decisions as to who they would vote for in the upcoming primary elections on August 2.

What Other Booths Were Present?

The food booths sold everything from cotton candy to fried pies to snow cones and funnel cakes. For the children, bounce houses were set up . The band Redline entertained the crowd.

No threat of rain this year, and the celebration was deemed a success as those attending gave a large applause after the show was completed.