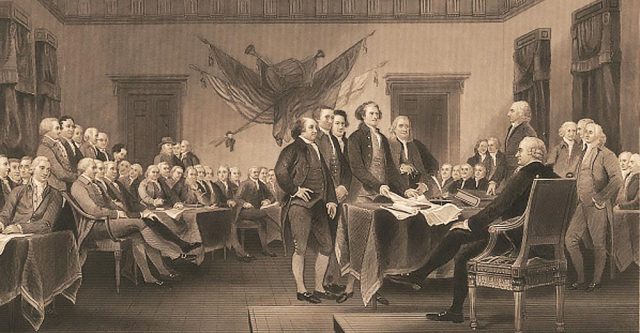 Painting of the Declaration of Independence by John Trumbull

It’s the time of year when we celebrate our nation’s birthday. How does this date come to be considered a birthday? Why did we fight? Who were the opponents? I would like to share some thoughts with you.

Why Is This Independence Day?

The United States celebrates its birthday on July 4, 1776. Our forefathers signed the Declaration of Independence from England on this date. There were 56 signers of this important document.

Who Did We Fight?

The Newly named United States of America declared its separation from England and King George. Unlike King George, who was a tyrant, they were a sovereign nation under God. In current times, the enemy is not so blatant as wearing a red coat. But actions speak louder than words.

Why Did We Fight?

King George from England became a tyrant. In other words, he made laws for the people that he did not keep himself. One can easily read the Declaration of Independence in a few minutes here. But listed are a few similarities of the 1776 people and today’s citizens.

There are more. One can read the grievances and compare to nowadays. The question is: will we as free men allow this tyranny to continue?