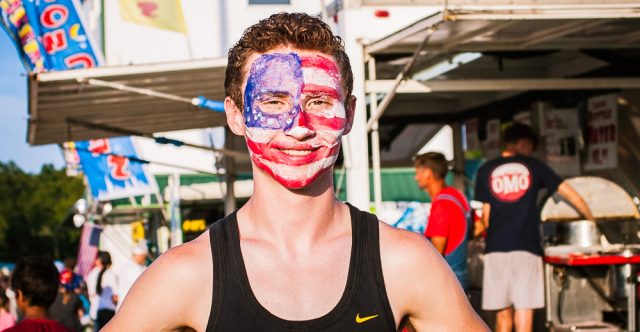 Wear America on your face.

Thayer, Mo. – On July 4, 2019, Thayer, Missouri held a fireworks celebration at the Thayer High School. As one of the largest and most cleared areas near Thayer, the school opened its field to local and nearby residents wanting to watch a spectacular fireworks display.

The evening began with an honor guard. Then came the Air Evac helicopter. A couple of skydivers showed themselves shortly after that, falling to the football field below while the audience watched. Then followed a break. Attendees can visit the petting zoo, get food for sale, and listen to live music. Kids played in the playground or on the field

By 9:00 p.m., small fireworks were appearing around the stadium. Spectators were urged to sit on one side of the stadium. Then the lights went out. WOW! What a spectacular display of massive fireworks celebrating our freedoms!