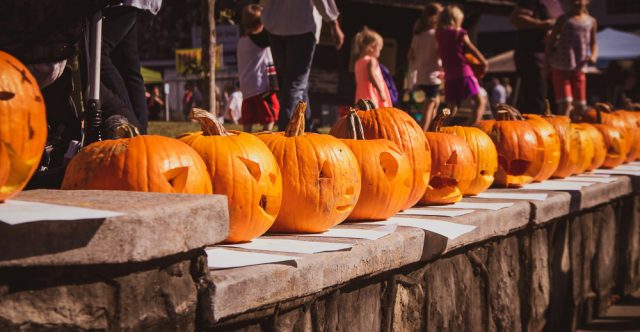 What to do in your free time in Alton Missouri.

Alton, Mo. – On October 7th , 2017 the thirty-second annual Black Gold Walnut Festival was held at the Alton courthouse around the square. Prior to the event people had made requests for booth availability around the courthouse, and they arrived early that morning to set up their goods. Around the square multiple tables and booths sported everything from knives to flowery scarves and decadent sweets. Live music was provided as throngs of people brought their children to the square to play games that were supplied by the booths.

On the courthouse stairs pumpkins were lined up, hollowed out and ready for the pumpkin carving contest that was available for children. The yard was filled with children holding fat, orange pumpkins, some of them decked out in smiling faces with triangle eyes while others had jagged teeth and no eyes at all.

A quilt show was being held that morning as well; many heirloom quilts were showed to an audience inside the Community Worship Center in Alton. Multiple families from around Alton had brought in a quilt. These quilts were presented along with a description of what the quilt had been through, who had made it, and who had current  possession. As the quilts were showed and the descriptions were read the audience appeared to warm up to the presentation.