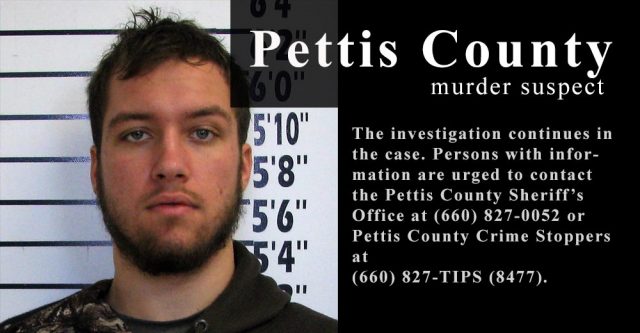 Oregon County Sheriff Press Release – Acting on information from the WeTip Anonymous Crime Reporting Hotline, Officers from the Alton Police Department, the Thayer Police Department and the Oregon County Sheriff’s Office arrested 18 year old Noah A. Kelliker of Marshall on an active Saline County warrant for violating his terms of probation in an assault case. Kelliker was arrested on January 11 at a residence on KK highway in rural Oregon County.

According to a release from Pettis County Sheriff Kevin Bond, on Friday, January 12, deputies following up on investigative leads in connection with the shooting death of 21-year-old Cassandra L. White at the Western View Estates Trailer Park on Oak Grove Lane in Sedalia on Tuesday, January 9., traveled to Oregon County to recover evidence and 18-year-old Noah A. Kelliker, who already was being held in the Oregon County Jail.

The release says, on Friday night, the Pettis County Prosecutor filed a four-count indictment against Kelliker, and a warrant was issued, charging Kelliker with a Class A Felony for Murder in the Second Degree, Class B and Class E Felonies for Unlawful Use of a Weapon and an Unclassified Felony for Armed Criminal Action. Bond reportedly has been set at $250,000 on the Pettis County charges.