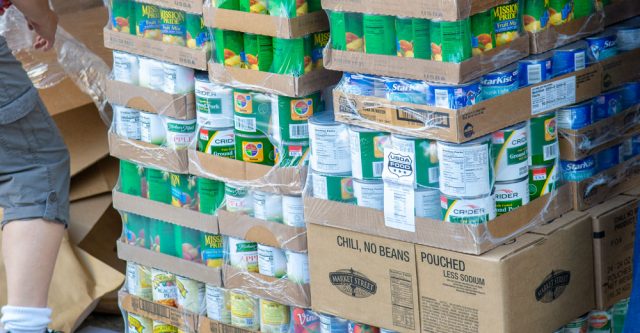 A pallet of canned fruit for the Alton Food Bank on December 1, 2021.

Thayer, Mo. – Harps Food Stores are changing. While here in Alton, we recognize the employees and we know where our items are in the aisles, Thayer and West Plains stores are developing. Here is the latest news.

Thayer hosts two Harps food stores. Neither one will remain the same.

The Harps Food Store located at 129 E. Walnut in the Town and Country Plaza in Thayer is celebrating the completion of its remodeling efforts. On Wednesday, April 27, 2022, they are inviting the public to their grand opening ceremony. This ceremony will take place at 10:00 a.m. A recent press release stated,

The newly remodeled 36,000 square foot Harps store will offer residents of Thayer and the surrounding community, a large variety [1].

They will offer fresh fruits and vegetables, including organics, Harps Black Angus Beef, pork, poultry, delicious deli and bakery products, health and beauty care, dairy and frozen departments. The store is open from 7:00 a.m. until 9:00 p.m. seven days a week.

However, the Harps store located at 100 Warmfork Road, formerly Town and Country, closed its doors on Sunday, April 3, 20222. Its employees moved to the Walnut Street Harps.