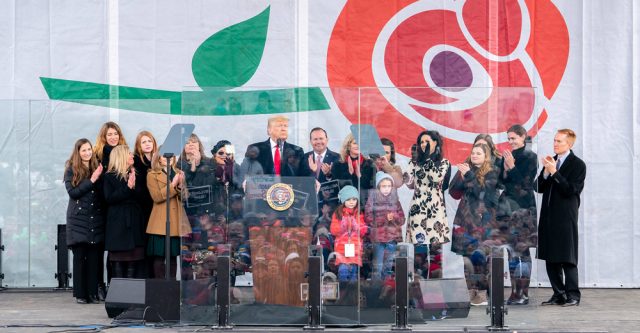 At the National Mall in Washington DC, on January 24, 2020, President Donald Trump talked at the 47th March for Life.  The president said,

“It is my profound honor to be the first President in history to attend the March for Life. “

He also stated the reason why they were there at the March for Life:

“We’re here for a very simple reason: to defend the right of every child, born and unborn, to fulfill their God-given potential.”

Trump also said that the march was a great success.

Trump tells us how he is pro-life:

“And from the first day in office, I’ve taken a historic action to support America’s families and to protect the unborn. (Applause.) And during my first week in office, I reinstated and expanded the Mexico City Policy, and we issued a landmark pro-life rule to govern the use of Title X taxpayer funding. (Applause.)

I notified Congress that I would veto any legislation that weakens pro-life policies or that encourages the destruction of human life. (Applause.)

At the United Nations, I made clear that global bureaucrats have no business attacking the sovereignty of nations that protect innocent life. (Applause.)”

If you want to read the President’s full speech you can read it here, or watch the speech.

But at the march, it was Mr. Trump’s mere presence, more than any of his promises or his ominous warnings, that was cause for excitement. [1] .