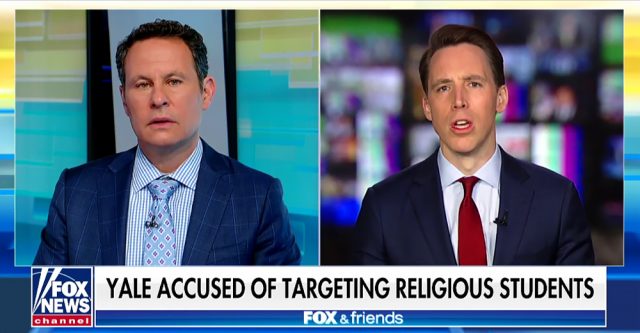 Senator Josh Hawley wrote a letter to Attorney General William Barr on Tuesday requesting that he pay close attention to Yale Law School and their controversial policies which could be “targeting religious students.” Although Yale is a private institution, it can still be told what policies to hold because it receives federal money.

Hawley, who graduated from Yale Law School in 2006, has recently teamed up with Senator Ted Cruz over removing discriminatory policies from the school. Cruz recently wrote a letter to the school, threatening to investigate the school’s policy that reportedly blacklists Christian groups. [1]

This came after Yale changed its policies on school stipends after they got multiple complaints from an LGBTQ group after a lawyer from a Christian group was invited to “speak about the 2018 Supreme Court decision in which the court voted 7-2 that Masterpiece Cakeshop of Colorado was not required to bake a wedding cake for a gay couple because of the owner’s religious beliefs.” [2]

Yale then responded to Cruz by releasing a statement which said that the school was nondiscriminant of any of their students. “Equality is foundational to our profession and the education of our students. Yale Law School does not discriminate on the basis of religion, nor on the basis of race, gender, veteran’s status, sexual orientation, or gender identity,” the school statement reads. [3]

“We recently decided that the Law School will require that any employment position it financially supports be open to all of our students. If an employer refuses to hire students because they are Christian, black, veterans, or gay, we will not fund that position,” the school added.

However, Hawley says differently, both in his letter to Barr and in an interview on Fox and Friends. “It sounds like Yale now has been exposed for what they’re doing and now they are trying to backtrack,” Hawley said.

“Given this background, there is a real risk that whatever definition of ‘religious organization’ Yale promulgates will be unreasonably narrow,” Hawley wrote in his letter to Barr. “Giving the false impression that Yale is protecting religious students while it is in reality capitulating to the demands of student protesters who want to target certain religious classmates for special disfavor.” [5]