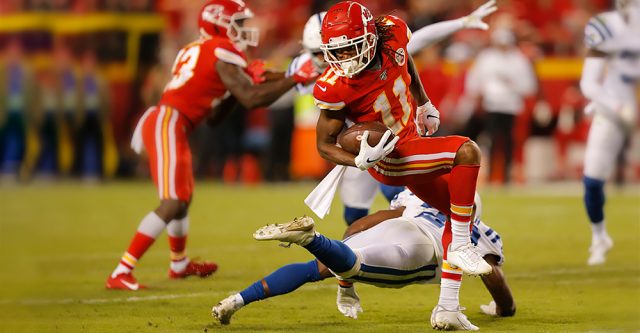 Kansas City, Mo. – The Kansas City Chiefs went up against the Indianapolis Colts on October 6. The game was held at Arrowhead Stadium. The final score was 13-19, with the Chiefs losing.

With 7:20 left for the first half Chiefs safety, Tyrann Mathieu, intercepted the ball and ran a few yards. That was Mathieu’s first interception for the Chiefs this season. The Chiefs fumbled the ball multiple times throughout the game, repeatedly giving it to the Colts. The Colts got another 3-point field goal putting the score to 13-10 at halftime with the Colts in the lead.

There were no points for either team in the third quarter as each team struggled to bring the ball across the field. In the fourth quarter, the Colts struggled to get a touchdown but failed, instead making two 3-point field goals, giving them a nine-point lead over the Chiefs.  The Chiefs tried to get a touchdown before the game ended to go into overtime, but they couldn’t keep their hands on the ball. They only managed to get a 3-point field goal. The final score was 19-13, with the Colts winning.

During the first half Chiefs quarterback, Patrick Mahomes, left ankle got hurt again, forcing him to limp off the field. As you can remember, during Week 1,  Mahomes got banged up and had his left ankle twisted. In this game, his ankle got tweaked again. One of his own teammates accidentally stepped on it during the game, which didn’t help. When Mahomes came out after halftime, his left ankle was taped up, but he was no longer limping.  The Chiefs also lost defensive end Chis Jones, linebacker Anthony Hitchens, defensive lineman Xavier Williams, and wide receiver Sammy Watkins during the game due to injuries.

Chiefs quarterback Patrick Mahomes completed 22 of 39, threw for 321 yards, threw for one touchdown, and had three carries for 17 yards. The player that caught the touchdown from Mahomes was Byron Pringle. On that throw Mahomes left the pocket and threw side-armed, with no feet on the ground, to the end zone where Pringle was. Byron Pringle dived and caught it for the first and only touchdown of the game.

The Chiefs will go up against the Houston Texans at Arrowhead Stadium on October 13, 2019; the game will start at noon Central Time.