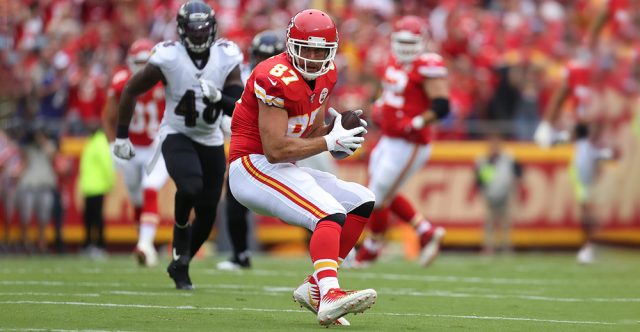 Kansas City, Mo. – The Baltimore Ravens, the first place for AFC North, met up with the Kansas City Chiefs, one of the best of AFC West, at Arrowhead Stadium on September 22, 2019. This was the Chiefs first home game of the season, and they played well, making 23 points in the first half of the game and ultimately winning 33-28.

Like many of the other games they’ve had this season, the Chiefs took a few minutes to get warmed up. In the first quarter, the Ravens were the only ones that scored any points; it wasn’t until the second quarter that the Chiefs began scoring points. There was a flag on the Ravens play for a field goal after they made their first touchdown, so they tried to make a 2-point goal instead- which they failed to produce. The Chiefs made 23 points in the second quarter; the Ravens failed to make any. The Chiefs made three touchdowns, two one-point field goals, and one three-point field goal, the halftime score was 23-6 with the Chiefs in the lead.

#MVPat 🚀 continues to play video games out there! (via @nfl) pic.twitter.com/PL7laP8yAR

People thought this would be a tight match as both Patrick Mahomes and Lamar Jackson threw for seven touchdowns and had had no previous interceptions from their first three games of the 2019-2020 season.

Patrick Mahomes, Chiefs QB, completed 27 of 37, threw for 374 yards, threw for three touchdowns, and had four rushes for 9 yards. The Chiefs players that caught three touchdown throws are, LeSean McCoy caught two, Demarcus Robinson caught one, and rookie Mecole Hardman caught one also- this was Hardman’s second NFL touchdown. His first touchdown was the game against the Oakland Raiders last week.