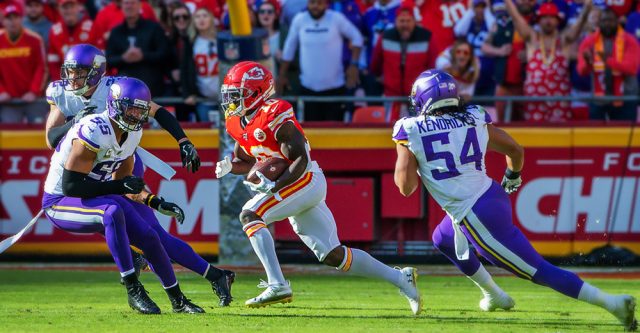 Kansas City, Mo. – The Chiefs had a spectacular win over the Minnesota Vikings on Sunday. The Chiefs won by just 3 points at the last second of the game. The final score was 26-23 with the Chiefs winning. They also made this win without reigning MVP quarterback Patrick Mahomes.

A Back and Forth Game

The first possession for the Vikings ended as fourth down and punt. The Chiefs got the ball back, and it ended up as a 40-yard touchdown for Tyreek Hill. The Vikings quickly matched it up with a touchdown of there own. The entire game was practically tied or just a few points off. In the second quarter, both teams only made a 3-point field goal tieing the game at 10-10 at halftime.

Then the Chiefs had a fantastic touchdown by Damien Williams. Kansas City was at their own end zone when Matt Moore threw a short pass to Damien Williams, he dodged a wall of Vikings defenders and ran 91 yards down the field to get a touchdown for the Chiefs. The only person in sight was Tyreek “Cheetah” Hill, who was Williams escort to the end zone. Hill also hit the fastest speed of his NFL career at 22.6 mph. That run was the longest in Chiefs history, at least for the offense since the defense had a 100-yard touchdown run against the Detroit Lions this year. The Chiefs also got a 3-point field goal putting the score to 20-16 before the fourth quarter.

The Chiefs also honored the U.S. military throughout the entire game. To begin, the players wore special Salute to Service clothes in their warm-up. Representatives from the Chiefs will present the USS Kansas City commander, Travis Dvorak, with a framed, autographed Salute to Service sweatshirt to bring onto the ship.

The National Anthem was sung, which was performed by U.S. Air Force and Afghanistan War veteran Mark Lindquist- at the same time, the colors were presented by the Naval Operations Support Center, and three F-18 Hornets flew overhead. Throughout the game, military members from every branch were honored. A unique rendition of “American Soldier” was performed by Dexter Roberts, while 60 service-members from every branch of the U.S. military held red, blue, and white star flags.

In the fourth quarter, it was a last-second game; Minnesota got a touchdown, and the Chiefs got a 3-point field goal, making the game tied at 23-23. The Chiefs field goal was a record-long for their kicker, Harrison Butker, at 54 yards.

It looked like it would go into overtime as the Chiefs were having trouble getting more points on the board after tieing the game. But when the Vikings offense got the ball, the Chiefs defense did their job and got the ball back for the Chiefs. Kansas City got the ball down to field goal range, but it was at 57-yards long. The Chiefs decided to run it one more time a get it closer for their kicker, Butker. Matt Moore threw to Travis Kelce, and Kelce caught it, so the kick was only 44 yards. With only 3 seconds left on the clock until the end of the game, Butker was certainly feeling the pressure to get the field goal and win the game. And Butker certainly did not disappoint as he made the field goal.

After he made it, everyone in the stadium (except the Vikings fans) were celebrating.

Matt Moore completed 25 of 35, threw for 275 yards, and threw for one touchdown. This was Moore’s first win since 2017. The Chiefs managed to win this game without their star quarterback Patrick Mahomes. This was also their first home game win of the season, putting their record to 6-3. The Chiefs are going up against the Tennesse Titans at LP Field in Tennessee; it will be played November 10 at noon Central Time. Patrick Mahomes has not been announced to be playing in that game, but it is likely.