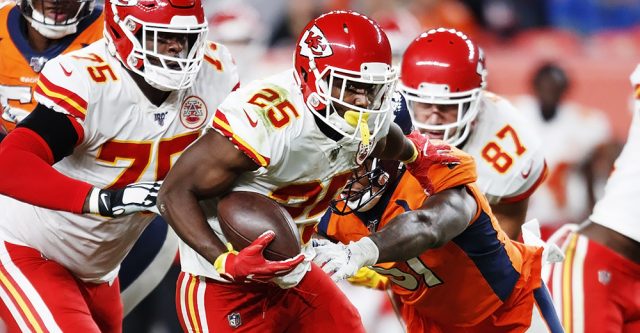 Denver, CO. – The Chiefs went up against the Broncos on October 17.  After losing the last two games, they won this one 30-6. But they did suffer a serious injury to their Quarterback, Patrick Mahomes.

The Broncos got six points during the whole game. And that was from a touchdown in the first quarter- although they made a field goal, they were given the option to try for two points since there was a flag after they kicked- they failed to complete for two points.

The Chiefs got a touchdown and a 3-point field goal in the first quarter.

The Broncos were forced to punt the ball on one of the plays; the punter ran to try and get a first down on this play but could not, as the Chiefs defense caught on and sacked him.

On a quarterback sneak for the Chiefs, in the second quarter of the game, Patrick Mahomes got injured. Worse than his ankle injury, Mahomes dislocated his kneecap and will not be playing next week.

The Chiefs got another 3-point field goal and another touchdown, this one was made by their defense. The Broncos fumbled the ball, and Chiefs defensive lineman, Reggie Ragland, recovered it and ran into the Chief’s endzone putting the score 20-6, with the 1-point field goal.

At halftime, the score was 20-6 with the Chiefs in the lead.

In the third quarter, the Chiefs broke out their backup quarterback Matt Moore. Moore threw to Tyreek Hill for an impressive 40-yard touchdown. That was Hill’s eighteenth touchdown of 40 plus yards since 2016. That was also Moore’s first touchdown since November of 2017. The Chiefs got three more points before the game ended, putting the score 30-6 with the Chiefs winning.

The Broncos quarterback, Joe Flacco, had nine sacks during that game. It was the most sacks in a series for the Chiefs. It was the Chief’s eighth straight win over the Broncos. And it was Chiefs head coach Andy Reid’s 200th career win.

After Mahomes left with the injury, the Chiefs defense really stepped it up. It was probably their best game yet of the season. The two players that caught the touchdown passes were Mecole Hardman and Tyreek Hill, who both had impressive runs. And Reggie Ragland recovered the fumble from the Broncos, resulting in a touchdown.

It was fourth down for the Chiefs, and Mahomes successfully did a quarterback sneak. Unluckily for him, he was at the bottom of the pile, and as the players got off the pile, we could tell Mahomes was injured. His kneecap happened to be dislocated; the Chiefs medical staff popped it back into place on the field, allowing him to walk off the field by himself. His knee was x-rayed, and less than two minutes after he left the field, he was ruled out of the game.

That was when backup Matt Moore came in. The Chiefs say he will be out at least three weeks but will play again in this season.

The Chiefs will play the Green Bay Packers October 27 at Arrowhead Stadium. The game will begin at 7:20 pm in Central Time.