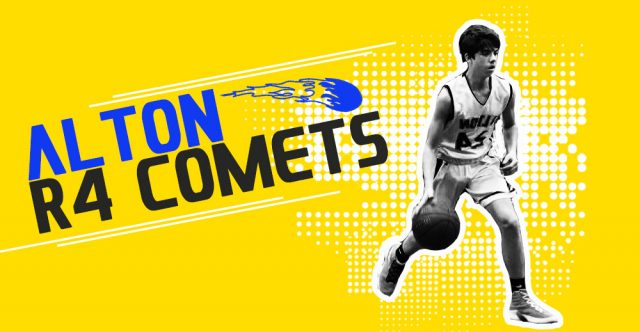 Alton, Mo. – On Tuesday night, February 12, 2019, the Alton Comets won their final home game over Ellington.  This was an event packed night with three separate games.

The evening began with the junior varsity boys competing against the Ellington Whippets. During half time, the pep band played for the crowd. At the final buzzer, Alton had squeaked by Ellington with a score of 44-41.

Immediately following the junior varsity, the lady Comets came on the court. With a look of determination on each face, they played hard. The score was within two points at the half. Nonetheless, the Lady Comets pulled off a victory with a score of 45-42.

Before the final game began, Alton paid tribute to the athletic seniors and their parents, presenting each family with a rose. Afterwards, while still on the court, everyone honored Stephanie Miller, the girls’ head coach of eleven years. This was her final home game before moving on to other ventures. Her overall record since she began coaching was 192-90; quite a record!

The last basketball game to be played was the varsity boys. As oftentimes the case, our comets started slow. There was momentum during the second quarter as the comets started in earnest scoring points. The halftime score was 31-24 with a Comet lead. Third quarter was again a lightening quarter. Fast passing, interceptions, and scores. At one point, the Comets were ahead by twenty points. The Whippets would not go down without a fight. The final score was a Comet win of 66-57.