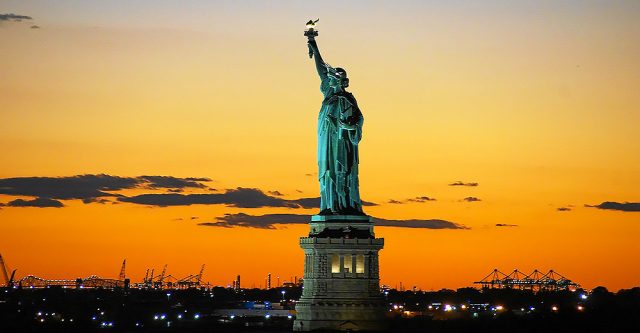 On June 17, 1885, the famous Statue of Liberty arrived in New York as a gift from France. The United States received the statue in pieces contained in more than 200 cases. France gave this as a gift of friendship. Here is how it came about.

This statue was designed by a French sculptor. Although scheduled to be completed by 1876 in celebration of America’s centennial, financial delays lengthened the completion date to 1884. Fundraising across France gathered the money necessary to finalize the statue.

Arriving from Paris, the statue reached New York on June 17, 1885. It took over a year to reassemble the stature. Nevertheless, on October 28, 1886, President Cleveland dedicated the Statue of Liberty. Officially called the Statue of Liberty, many call her Lady Liberty. Her location is near Bedloe’s Island [1], which is the chief immigration station. President Coolidge designated it a national monument.

Today, the Statue of Liberty is one of America’s most famous landmarks. It appears in numerous movies and photographs. The statue closed its doors in March, 2020, due to the spread of the coronavirus. Currently, the statue itself is not open. However, the island, theater, cafe, and pedestal are open. Is you are planning a trip there, it is best to call ahead to reserve ferry arrangements and tour times.