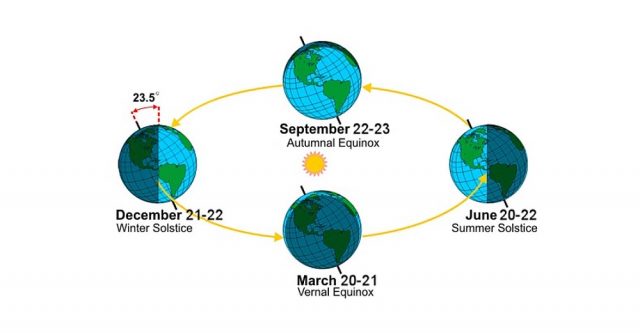 The autumnal equinox of 2018 is drawing closer. After months of sweating your way through the hot summer, fall is finally just around the corner. The first of day of fall, as well the autumnal equinox, happen on the same day, September 22nd (only a few days away). On the fall equinox, day and night are each about 12 hours long. (With the actual time of day and night being equal, in the Northern Hemisphere, occurring a few days after the autumnal equinox.)  In many areas of North America, the countryside quickly erupts in vibrant colors of red, yellow, and orange. The leaves begin to drop off the trees, and temperatures start to drop.

What is a fall equinox?

During the equinox, the Sun crosses what people call the “celestial equator.” It looks like the line that marks the equator on Earth but extends up into the sky above the equator from north to south. Earth’s two hemispheres receive light from the sun about equally. The sun is overhead at noon as seen from the equator, so at this point, the amount of night and daytime are practically equal. Even on the equinox though, hours of daylight and nighttime aren’t the same. However, they do come very close to being equal, with the difference being only a few minutes. [1]

How length of day affects temperatures

Between the years longest day and the hottest average temperatures there is a gap. The highest average daily temperature happens nearly three weeks later than the longest day of the year, usually in mid-July. This lagging in temperature is because of the time it takes for the ground and water to heat up.