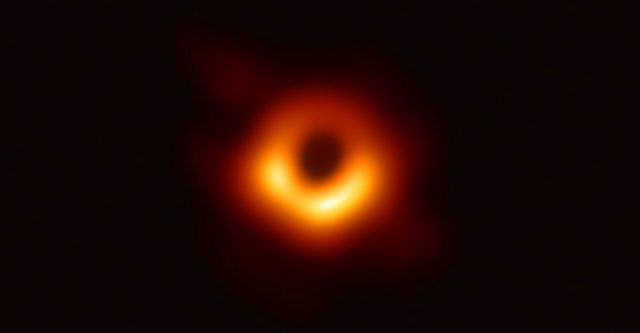 The first image of a black hole, from the galaxy Messier 87. (Photo by: Event Horizon Telescope Collaboration, via National Science Foundation)

On Wednesday, April 10, scientists announced that they had taken a picture of a black hole that is located in the galaxy Messier 87, which is approximately 55 million light-years away from Earth. “We have seen what we thought was unseeable,” [1] said Shep Doeleman, an astronomer at the Harvard-Smithsonian Center for Astrophysics, during a news conference in Washington D.C. on Wednesday morning. “We have seen and taken a picture of a black hole.”

Using an Event Horizon Telescope (EHT)- eight ground-based radio telescopes arrayed in an earth size proximity- astronomers were able to capture the first picture of a black hole. “This is a huge day in astrophysics,” said NSF Director France Córdova. “We’re seeing the unseeable. Black holes have sparked imaginations for decades. They have exotic properties and are mysterious to us. Yet with more observations like this one they are yielding their secrets. This is why NSF exists. We enable scientists and engineers to illuminate the unknown, to reveal the subtle and complex majesty of our universe.”

Although black holes are universally accepted today, they remain a mystery among astronomers. The EHT manages to link several telescopes from around the globe to form a larger telescope. Using global collaboration and very-long-baseline interferometry, today’s astronomers managed to take their first picture of a black hole located in the galaxy known as M87, but are currently working on another black hole in Sagittarius A.

“We have achieved something presumed to be impossible just a generation ago,” concluded Doeleman. “Breakthroughs in technology, connections between the world’s best radio observatories, and innovative algorithms all came together to open an entirely new window on black holes and the event horizon.” [3]