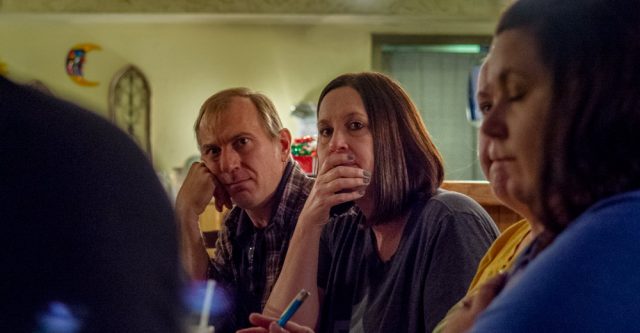 Chamber members listen intently at the Alton Chamber of Commerce meeting on November 18, 2021.

The last solar eclipse seen over the United States was in August of 2017. The next one will be on April 8, 2024. Alton, Missouri, as well as the Ozarks, will be in complete totality.

Autumn Shirley and Sasha Daucus have been going around to different towns across the Ozarks raising awareness of the eclipse and suggesting ideas for the towns to do.

Another thing to consider are maps. Shirley said that in most places the traffic was decent before the eclipse. But right after it was done, the roads were crowded. As Missourians know, especially in the rural areas, we have a lot of dirt road, dead ends, and no signal in areas to check the GPS. So she suggested having maps so people know how to get out of the area.

The 2024 total solar eclipse will be a big event: especially for the Ozarks. This will be the final total solar eclipse this generation will see. More people will want to get to an area that has a view of the solar eclipse. This will bring a rise in tourism. With tourism will be people stopping at restaurants, stores, and hotels buying souvenirs. Autumn pointed out that although the eclipse will bring more revenue in, we should make them want to come here often to get what we have: the rivers, beautiful scenery, the stores we have.

Some people may think, “The eclipse is two years away. We have plenty of time.” For the 2017 eclipse, Caspar, Wyoming, started five years in advance planning. They got a big turnout from it too. If your business or city wants to start planning for the eclipse and learn how to plan for it, you can get involved in the Missouri Eclipse Task Force. You can join here.

Alton, and other cities in Missouri, should start planning now. Plan for a four-day festival; let the law enforcement and emergency people know that there will be an influx of people; make sure to have porta potties ready; get the stores ready; get maps ready for the people coming; get musicians and food trucks lined up.

In June of 2023, the Ozarks will be showcase at the Smithsonian in Washington, D.C. That alone will bring more people to the Ozarks and Alton.