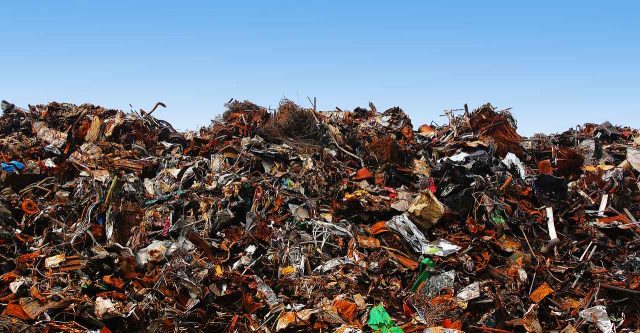 Landfill in front of blue sky.

That’s a lot of Garbage!

That is, stop buying so much trash and you won’t throw away as much — everything from cheap Christmas decorations to the Secret Santa gift you bought which is both, inevitably cheap and useless.

If that’s too complicated for you, we compiled a short list of things that anyone can do to lessen the amount of stuff they throw away this holiday season without it impacting your celebrations.

Think more “everything stays the same, but there’s less waste” and less “sitting in a bare house eating recycled plastic and playing with rocks under a permanently-painted-on-your-wall Christmas tree.”

The closer to Christmas you shop, the bigger rush you get in. The bigger rush you’re in, the more you grab items off the shelves without caring if the receiver will use it or if it will be tossed into the trash in a week or two.

Okay, so you want to eat something new this holiday season. Is now the time time to cook up ten pounds of Calamari which you’ve never tried before? Maybe not. You can still cook the calamari, just do it in moderation and see if you or your family even like it. Try skipping the dish that you know only your great aunt enjoys and instead make more of what you like.

Trash in my Yard

Christmas decorations at the dollar store and Walmart can look appealing these days. Don’t fall for their low prices though; after all, you get what you pay for. If you’re tossing out Christmas lights every year, you’re not only tossing out your money but you’re also working on one million extra tons of garbage. Don’t splurge on heavy-duty lights and decorations, save money on heavy-duty lights and decorations. You’ll thank yourself later.

What About the Tree?

For years the Christmas tree has been a controversial topic regarding how much environmental impact it has. It takes 20 years of use for a fake tree to mitigate the environmental impact it causes. Most people throw them away after six years of use. [2] A live tree has been shown to have one third of the carbon footprint of a plastic tree. It’s up to you, whether you want to throw away your money each year or if you want to help fill a landfill. Tough choice.

This one is a dead giveaway. You eat off of paper dishes; you throw away paper dishes. Reduce your trash by doing the dishes. Take turns or let the dishwasher do it for you.

Did you know that the United States produces about 4.6 million pounds of wrapping paper every year? Even more shocking is that Americans spend over $7 billion on wrapping paper each year. I’m not saying to leave unwrapped gifts under the tree. I am saying to stop wrapping a 4″x4″ box with three square feet of wrapping paper. Be a little more conscious of how you wrap.

A Gift That Keeps on Giving

Oh, toys! We get our kid a toy and the next day they no longer enjoy it. They begged for it for over a month. To help them take value in money and to help minimize your regrets after seeing a gift you bought being thrown away in January, try gift cards. Movie tickets, gift cards, or memberships. Give them an experience that they can enjoy without throwing your time into the trash.

You’re not the only one that dumps 1 million extra tons of garbage into the trash every week during the holiday season. But you can be someone who puts a little less in the trash this holiday season. This doesn’t have to be hard, and little things can make a significant difference.